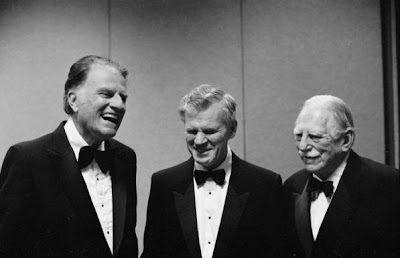 Above is a wonderful photograph of Billy Graham, "Doc" Watson and Joseph Bryan. This photo was taken during a North Carolina Public Television Awards evening.

Billy, of course, is a world renowned Christian evangelist. He was born on a dairy farm outside of Charlotte and has lived most of his life in Montreat NC, in the Great Smokey Mountains. His impact on, and contribution to, the world is immeasurable.

"Doc" Watson was born in Deep Gap, NC. He has won 7 Grammy Awards, as well as the Grammy Lifetime Achievement Award. He is a prolific bluegrass, country, gospel, blues, and old-time mountain music composer and performer.

Mr. Bryan, who died in 1995 just short of his 100th birthday, was a Greensboro philanthropist, insurance executive, and broadcast pioneer. He began his career as a cotton broker in New York City before meeting and marrying Kathleen Price, the daughter of Greenboro's Julian Price, the founder of Jefferson-Pilot Insurance Corporation. His benevolence is evidenced by the UNC-G Bryan School of Business and Economics, the Bryan Alzheimer's Research Center at Duke, and Bryan Park Golf Course in Greensboro, among much more across the state. Mr. Bryan was a Charter Member of Augusta National.

(Photograh by Hugh Morton)
Posted by bbogodfrey17@gmail.com at 7:22 AM