"Something Must Be Done About Prince Edward County: A Family, A Virginia Town, and a Civil Rights Battle" 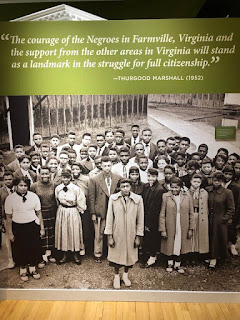 I make a book recommendation: "Something Must Be Done About Prince Edward County: A Family, a Virginia Town, and a Civil Rights Battle", by Kristen Greene.

The book has a Greensboro tie. It is a fascinating story about Prince Edward County VA (Farmville) public schools completely closing down for five years (1959-1964) in reaction to Brown vs The Board and opening a 'whites only' academy with the public school money. There was no school option for children of color in the county during that time. (It was the only school system in the country to completely close down as a result of Brown v Board.).

The Prince Edward Academy (whites only) was going broke in 1993 when billionaire JB Fuqua contributed $10M dollars to upgrade it. He hired creative, brilliant, private school turnaround specialist who grew up in Greensboro and graduated from Page in 1967. She turned this tainted, rundown school around, made it diverse, progressive, academically and athletically strong and moved it into the 21st century.

It’s a story of the old South, civil rights and segregation, the struggle for forgiveness, reconciliation and atonement. Ruth Shuping Murphy, who JB Fuqua hired and made President and Headmaster, is featured prominently in the book. JB Fuqua (born in Farmville) is also the donor for whom the Duke Business School is named.

It is fascinating history, story, and a great read.  My wife and I took a day trip to Farmville VA.  We visited the Moton Civil Rights museum (in the old, dilapidated black high school from which black students walked out in 1951), the Fuqua School, and the black First Baptist Church where Martin Luther King and Robert Kennedy came and spoke and to lend support to the black community.  I will be attending a lecture at Elon University on Wednesday, September 12, given by author Kristen Greene. The book is the 'community read' for Fall at Elon.  I will update my blog afterward.
Posted by bbogodfrey17@gmail.com at 9:37 AM No comments:

The Harrison's of the 19th Century, Collecting, and a Symmes Family Tie 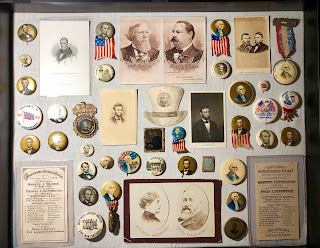 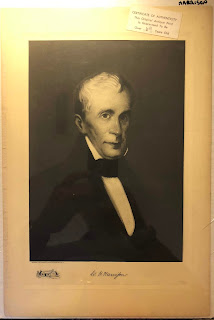 William Henry Harrison was an American military officer (prominent in conflicts with Native Americans and leader in the famous Battle of Tippecanoe), a politician (Whig), and the ninth President of the United States.  He died of pneumonia thirty-one days into his first term in office.  Harrison was a son of Founding Father Benjamin Harrison V and paternal grandfather of Benjamin Harrison, the 23rd President of the United States. He was the last president born as a British royal subject in the original thirteen colonies before the American Revolution (1775-1783).

William Henry Harrison was born the seventh and youngest child of Benjamin Harrison V and Elizabeth Bassett Harrison at Berkeley plantation along the James River in Charles City, Virginia, February 9, 1773. He attended Hampton Sidney College, and in 1795, at age 22, met Anna Tuthill Symmes of North Bend, Ohio. She was daughter of Anna Tuthill and Judge John Cleves Symmes , who served as a Colonel in the American Revolutionary War.  William and Anna Symmes Harrison had ten children including Elizabeth Bassett (1796-1846), John Cleves Symmes (1798-1830), father of future US President Benjamin Harrison, Benjamin (1806-1840), and Mary Symmes (1809-1842).

Benjamin Harrison, (1833 - 1901), was an American politician and lawyer (Whig and Republican), who was elected the 23rd President to the United States in 1888, defeating the Democratic incumbent, Glover Cleveland. He was the grandson of William Henry Harrison, the great grandson of Benjamin Harrison V, a founding father, and son of John Scott Harrison and Elizabeth Ramsey Harrison.

The above pictures from my collection include a large, period portrait of William Henry Harrison, and a 19th century and 20th century collection of period pieces, reunion pieces (such as Gettysburg), anniversary pieces (such as Washington's birthday), and advertisement pieces, among other items.  In addition to the large portrait item, there are three prominent 19th century Harrison pieces in the collection: a vintage die-cut hat ad (center of frame) and a cabinet card (bottom center) of Benjamin Harrison and his wife, and a portrait card of William Henry Harrison (upper left).

Posted by bbogodfrey17@gmail.com at 5:22 PM No comments: