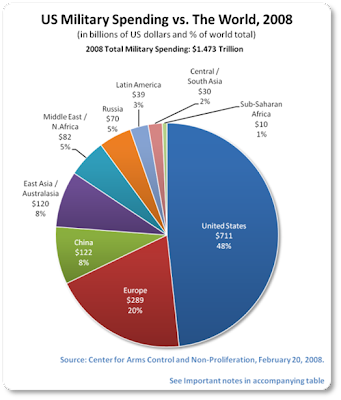 Considering 21st century economic challenges and changing strategic military needs and objectives of America, I suspect that in the near future, the United States will have to look seriously at the Pentagon for significant budget cuts. Meaningful reduction in national defense expenditures will be one of those areas, like entitlements, which will take a great deal of political courage and leadership to achieve. There are huge numbers of special interests groups, as well as political and military zealots, who will refuse to be objective and supportive of, at the very least, serious study of the issue.
I believe the chart above is indicative of a national defense policy which, considering the current economic and strategic military environment, needs drastic rethinking. I would hope that at some point soon, a high-level Presidential Commission, similar to the economic deficit commission which is currently being headed up by Erskine Bowles and Alan Simpson, would be convened in order to address reduction in Pentagon expenditures.
As of 2008, and I have no reason to think it has changed since, United States military spending was nearly as much as the rest of the world combined. Quite frankly, in my view, this chart indicates an absurd approach to the allocation of America's economic resources as they relate to national defense in the 21st century.
Posted by bbogodfrey17@gmail.com at 7:18 PM