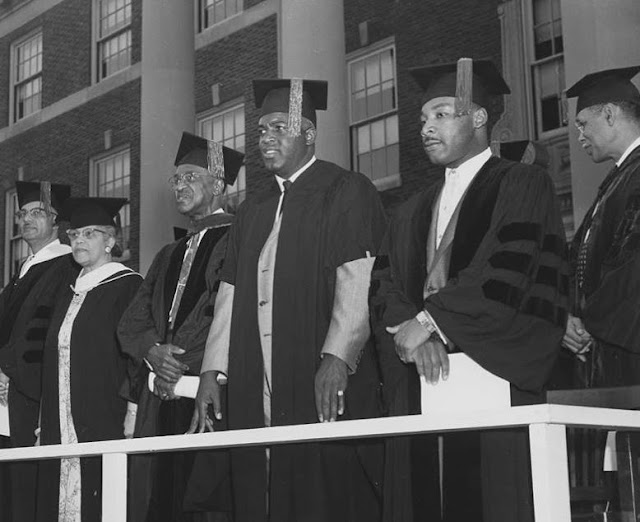 This is quite a historic shot of, without question, the two most significant figures in the 20th century movement for racial civil rights in America.
Posted by bbogodfrey17@gmail.com at 8:13 PM No comments: 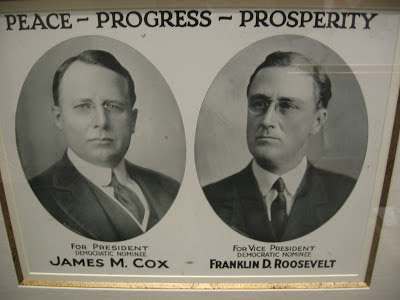 Pictured above is one of the top posters in the hobby of political item collecting.  It is from the campaign of 1920. Pictured are Democratic candidates James Cox, a communications pioneer and giant from Ohio, and a young Franklin D. Roosevelt of New York State.  They would lose soundly to a GOP ticket of Warren Harding and Calvin Coolidge in November of 1920.
This poster hangs in the corporate headquarters of Cox Communications in Atlanta, among a collection of the top James Cox campaign pieces in the nation.  The collection is available for view by the public.  It is an exceptional collection of American campaign history.   ﻿

Posted by bbogodfrey17@gmail.com at 9:29 AM No comments:

Picture of the Day - Eleanor Roosevelt 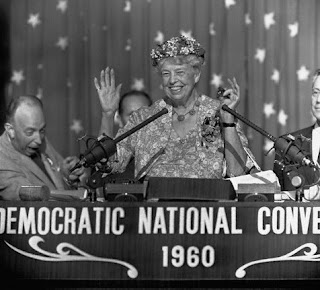 Here is Eleanor Roosevelt appearing at the 1960 Democratic Convention.

Interestingly, Eleanor herself was born into the wealthy and well-connected New York family, the Roosevelt's.  Eleanor's father was Elliott Bullock Roosevelt.  She was the niece of President Theodore Roosevelt, Elliott's brother.  She married her father's 5th cousin, Franklin Delano Roosevelt. She was the nation's longest serving First lady, serving from 1933 to 1945.

The Roosevelt's marriage was complicated from the beginning by Franklin's controlling mother, Sara, and after discovering Franklin's affair with Lucy Mercer in 1918, Eleanor resolved to seek fulfillment in a public life of her own.  She was a strong First Lady, very involved with, and very committed to, the affairs of the nation.

Mrs. Roosevelt died, two short years after the above photograph was taken, at age 78, in November of 1962.
Posted by bbogodfrey17@gmail.com at 8:14 AM No comments:

Humor For the Day 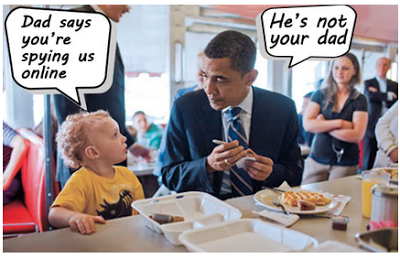 NSA government surveillance scandal is a concern for many, especially for the little boy now.
Posted by bbogodfrey17@gmail.com at 3:59 AM No comments: 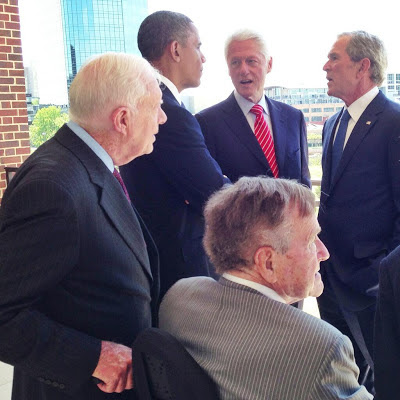 Here is a nice shot of your 5 living Presidents, a gathering at the recent dedication of the new GW Bush Presidential Library.

On today, July 4th, I realize it is supposedly more appropriate to reflect on those who have served the nation in military uniform, but I choose to reflect on how unique it is that in America the military, and the nation, is lead by citizens out of uniform, by the people.  I salute the service of the 43 men, represented by these living 5, who have chosen to put themselves in this awesome position of world leadership.

Today, I wish a happy, and a grateful, American Independence Day 2013 to each of them and to you the people, who they have attempted to serve and lead for 237 years of our nation.
Posted by bbogodfrey17@gmail.com at 11:18 AM No comments: 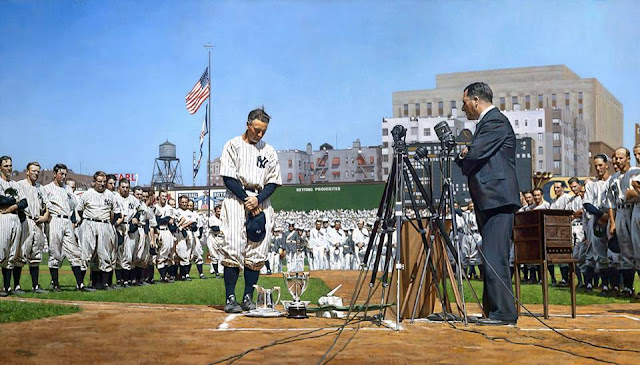 A panoramic view of perhaps the most historic scene in baseball history. Few moments within the game actually transcend the sport - this is most certainly one of them.  Lou Gehrig, age 36, stricken with ALS, gives his farewell address to the world in which he assures the world that he is "the luckiest man on the face of the earth."  He would die two short years later.
Posted by bbogodfrey17@gmail.com at 10:48 AM No comments: 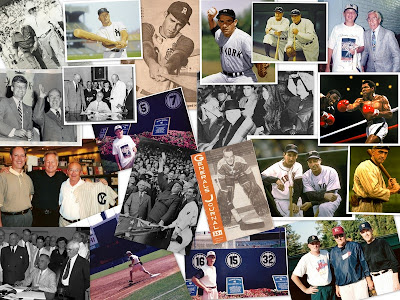 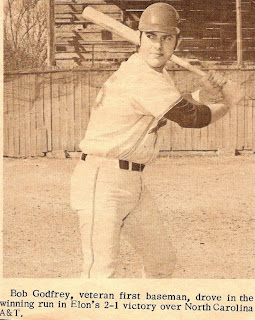 Baseball can be fun for some, a nice recreational outlet from life's stresses and challenges.  For others of us, it can be much more.

As a young person, baseball for me built self-esteem, self-confidence, positive self-concept.  It provided social activity, socialization, recreation.  Baseball helped me in college selection and admission and helped with my college tuition.  Baseball resulted in travel opportunities as a young person I would not have otherwise experienced, exposure to the world, my first airplane flight, an unforgettable trip to Cooperstown with my son, Spring Training trips with my wife, and much, much more.

As was so beautifully expressed in a wonderful book I recently read, "Baseball as a Road to God" by John Sexton, baseball can provide very deep meaning for some of us.  For some, baseball can touch the spiritual dimension of life......the "ineffable", as Sexton explains, that which cannot be defined or captured with words.

Sexton reveals a surprising amount of common ground between the game and what we most recognize as religion: sacred places and times, faith and doubt, blessings and curses, hope, struggle, redemption, joy.  He talks of the heroic deeds of those such as the 'saintly' Christy Matheson, the 'sinful', deceptive antics of a Ty Cobb, the loving intimacy of a game of catch between a father and a son.


For some of us, baseball can be about what Sexton describes as "hierophany"....a touching of transcendent places....."when the sacred manifests itself in space, where the real unveils itself", as Elide wrote, "that sacred space, deep and personal to each individual, which may seem quite ordinary to others."  (For Sexton, those "spaces" being such places as by the radio as a child in 1955 on his knees praying for Dodger victory in Game 7 of the World Series. For others, at Forbes Field or in front of the television in 1960 as Bill Mazeroski hits his walk-off home run in Game 7 against the hated Yankees).

Baseball can be meaningful or it can be mundane.  Either way, a part of Americana it has certainly remained, and for me, yes, "ineffable."

For beautiful, descriptive, meaningful writing about baseball, I recommend the writing of Renaissance man, former Baseball Commissioner and Yale President, the late A. Bartlett Giamatti.  To read about what the game baseball has meant to my good childhood friend Miles Wolff, and he to it, click here.

(About the collage pictured above:  It contains many of my most meaningful baseball shots...Rob with Phil Rizzuto at Fenway Park, big league umpire friend Drew Coble and me at Elon alumni game, me at first base in Yankee Stadium, Jim Bouton, Johnny Smith and I together, a best friend Mike Carruthers (best hitter outside the big leagues I ever saw), me by my late-friend Thurman Munson's plaque in Yankee Stadium, Mickey Mantle, 'Shoeless' Joe Jackson, on and on.  A few are not baseball, only a few.  Below, hallowed ground). 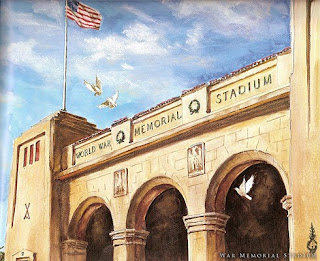 Posted by bbogodfrey17@gmail.com at 7:50 AM No comments: 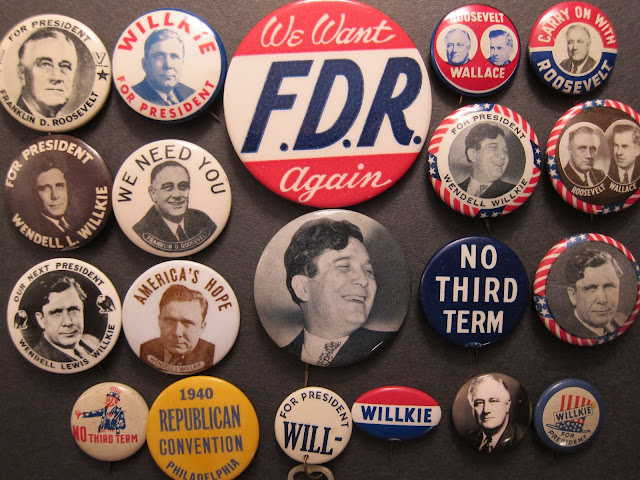 Although it is an intriguing part of the book, "1940" is about much more than the presidential election of that year.  It is about the buildup to the second world war and the great divisions in America in 1940.  With a backdrop of the tragic events occurring in Europe, it captures in descriptive detail the buildup to America's critical involvement in the second world war.

It is amazing and distressing to read about the misguided isolationist movement of the late 1930s in America.  One of Hitler's greatest aides and propagandists was Charles Lindbergh, American aviation hero.  A quite shameful picture is painted of Lindbergh as he embraces Hitler and the Nazi movement.  He is joined by a great many well-meaning, misguided Americans, who embrace an isolationist movement in America as Hitler now denominates all of Europe by mid-1940, with the exception of Great Britain.

Isolationists include many industrialists such as Henry Ford, many Midwestern Republicans including 1936 GOP presidential candidate Alf Landon and many Midwestern U. S. GOP Senators, many anti-Semites who could care less about what is happening to Jews worldwide, many anti-New Deal Republicans, and many other anti-FDR Americans.

Author / historian Susan Dunn captures the excitement at both major party conventions in 1940, as thankfully for America and for western civilization, moderate interventionist Wendell Willkie is triumphant at the GOP convention in Philadelphia, and Franklin Roosevelt is easily nominated for an unprecedented third term at the Democratic convention in Chicago.

With charismatic Charles Lindbergh, who shamefully called for surrender to Hitler's demands, a central character in the first third of the book, historian Susan Dunn brings to life the debates, the high-powered players, and the dawning awareness of the Nazi threat as the presidential election looms.  In strict contrast to present day hyper-partisan bickering and fighting across party lines, Willkie and FDR help bring America together as the German threat to Western Civilization worsens.  With December 7, 1941 just over the horizon, in spite of so many American isolationists so firmly on the wrong side of history, America begins to unite behind the stunning and brilliant leadership Franklin Delano Roosevelt, and with the patriotic aid of Wendell Willkie.

Above is an assortment of campaign pins from the election of 1940 from my personal collection of political Americana.  "1940" helps bring alive pieces from the 1930s and 1940s from my collection, one of the 'golden ages' of political buttons.

Posted by bbogodfrey17@gmail.com at 10:00 AM No comments: