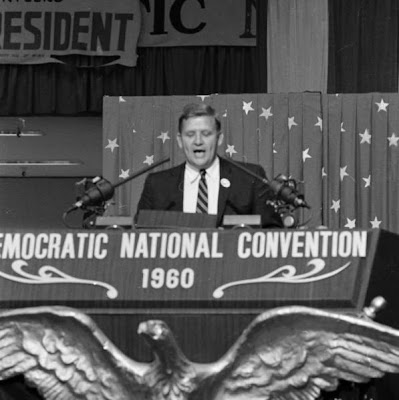 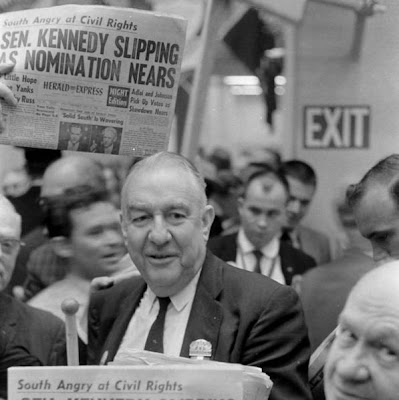 Strategists in the GOP then began to combine the themes of race and religion, as Jerry Farewell's Moral Majority came on the seen. Then, Ronald Reagan appeared and it was all tied together with the "restore America" focus, along with lowering taxes and reducing social programs, and the South, by the mid-80s, became largely Republican.
That is a simplified version of what has transpired in South regarding political parties since Reconstruction, but I believe it captures the essence. As JFK is nominated for President, the second photograph above of Senator Sam Ervin, surrounded by southern anti-Kennedy sentiment, illustrates the mood in much of the South in 1960.
The irony, and the greatness of Governor Terry Sanford and North Carolina, is reflected in the fact that Sanford was the first southern governor to embrace both John Kennedy for President and the civil rights movement. As a result, Sanford was asked to deliver Kennedy's seconding speech at the 1960 Democratic Convention, which he did (he is shown doing so in the top photo above). America, the South, and life, are fulled with both irony and contradictions.
Posted by bbogodfrey17@gmail.com at 9:16 AM