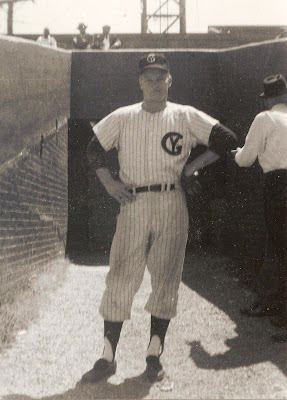 I personally took this photo of Jim Bouton standing in the tunnel to the dressing room at Greensboro War Memorial Stadium in 1960 (Woo! That's 50 years ago; I was age 12). Bouton was a 20-game winner for the G-Yanks, who were Carolina League Champions that summer. Phil Linz was the shortshop. Bouton went on to have a nice career with the big Yankees.

Bouton, quite a maverick (I like mavericks), went on to write the first "tell all" sports book....... "Ball Four". He also was a TV sports anchor in New York City for a time, and he is an old sports stadium preservationist. Bouton actively opposed the successful minor league effort in Greensboro to leave War Memorial Stadium.........which I could relate to, although I was supportive of efforts to build a new stadium.

Jim Bouton, one of those characters who adds uniqueness and color to the game.
Posted by bbogodfrey17@gmail.com at 1:18 PM