Greensboro's Miles Wolff - He Has Re-Shaped Baseball in Our Lifetime 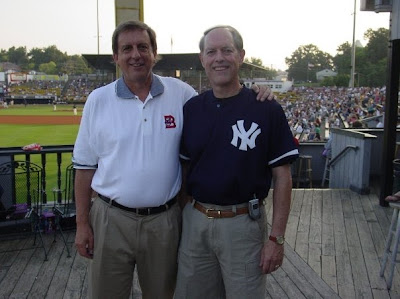 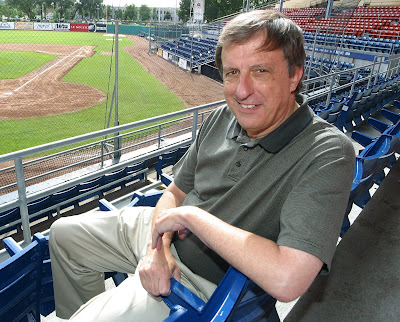 On a Saturday night in 1961, his program lucky number was called and he went out to home plate between innings and threw the ball through a hole in the middle of a large piece of plywood which had been placed at second base. He was amazed at a game in '60 when a Boa Constritor snake was given away on Tropical Pet Night as a fan promotion. He was fascinated in the late '50s when baseball clown Max Patkin came and entertained while coaching first base, and he seemed to watch with interest as local companies bought large blocks of tickets to give away to employees and customers.


He didn't play on many teams growing up, but I recall so clearly one night at the ballpark when, at about age 14, Miles Wolff had the foresight to tell me, "Bobby, I can tell you now, I am going to stay in this game the rest of my life." Today, 50 years later, Miles is considered the father of the rebirth of minor league baseball, was named by ESPN as the 8th most important sports owner of the past 25 years, and was recently named the 79th most important person in the history of baseball by The Baseball Encyclopedia.


Miles and I sat together at Greensboro's War Memorial Stadium what seemed like every summer night from 1958 to 1966. We both lived in walking distance of the stadium. We loved the Greensboro Yankees. We had on-going arguments about who our best players were and which opposing teams and managers were most worthy of concern and fear. Manager Jack McKeon at Wilson was always high on the list. But Miles was always a close observer of operations as well as the game.


As we grew older, Miles went off to college at Johns Hopkins University in the early to mid-sixties. I played on a State Championship American Legion baseball team, and played at Elon College and in the Cape Cod League. Miles went on to earn his Masters Degree at the University of Virgina in Southern History.
Miles began a career as a baseball executive in 1971. He became General Manager of minor league teams in Jacksonville, Fla, Savannah,Ga, and Anderson, SC. He was named Sporting News Minor League Executive of the Year in 1973. His first job in baseball was as the play-by-play radio voice of the AAA Richmond Braves.


In 1980, Miles turned his attention to ownership. He purchased a Durham franchise in the Carolina League for $2,417. and restored the Durham Bulls who had been idle for 10 years. He turned the promotional skills he had been exposed to years earlier at Memorial Stadium into what became a new wave of success in minor league baseball. Ten years and a one Hollywood movie later, the Durham Bulls were a national phenomenon. In 1993, Miles sold the Bulls to Jim Goodman and Capital Broadcasting for between 3 and 4 million dollars.


Miles, a developer of the independent league concept (no big league affliation), went on to create the Northern Independent League. Today he is commissioner of the Can-Am Independent League and the Central Independent League. Miles owns teams in Quebec City, Quebec and Burlington, NC. For 18 years he owned and operated the weekly Baseball America publication. In the past, he has owned the Raleigh IceCaps and various other minor league sports franchises in Butte, Mont., Asheville NC, and Utica, NY, among other places. Miles has written two books, Season of the Owl (1980), a baseball novel set in Greensboro, and Lunch at the 5 and 10, an account of the 1960 Woolworth sit-ins in Greensboro. He is co-editor of the Encyclopedia of Minor League Baseball.


Miles simply loves to attend baseball games, and he has learned, and taught others, how to make baseball entertaining, enjoyable, and affordable in America. And he has learned to do it on a very profitable basis. To attest to his love to simply attend games, above is Miles and me at the last game at Greensboro's War Memorial Stadium in 2004. He has been with me to NewBridge Park in downtown Greensboro as well.


Miles Wolff......... such a good guy and such a success story, as he has brought the game he loves to towns and families across America......in the same wonderful fashion that he and I experienced it at War Memorial Stadium........ some 50 years ago.
Posted by bbogodfrey17@gmail.com at 6:35 AM