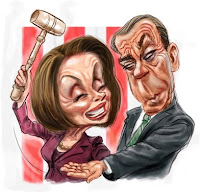 The following is an interesting take on the 2010 off-year election I have heard discussed which I think has merit: The best thing that could happen to Barack Obama may be a Republican takeover of the House, or the House and the Senate.
Obama has had major legislative success in the first year and a half in office. But the GOP seems to be winning the communications battle with rank and file, mainstreet America. There is nothing to indicate that that would change if he continues to enjoy Democratic control of both houses. The President needs to change the dynamic. He may need a negative, GOP controlled Congress, attempting with to turn back legislative achievements, against which to campaign. This could be the event to change the equation and the dynamic as he approaches 2012. Interesting. We shall see.
Posted by bbogodfrey17@gmail.com at 12:25 PM