The Prez and The Boss 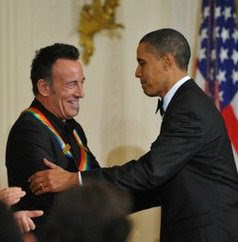 Catching The Boss and The E Street Band on tour in concert is toward the top of my bucket list. Springsteen, a 62-year old New Jersey native, has earned 20 Grammys, two Golden Globes, and an Academy Award. He is a classic and an entertainment icon of our time.

Named by 'Rolling Stone' as the 23rd Greatest Artist of All-Time, a career highlight of his for me was his appearance at the 2008 Presidential Inauguration, performing Woody Guthries's "This Land is Your Land" with Pete Seeger.
Posted by bbogodfrey17@gmail.com at 8:34 PM