The Story of Tom Turnipseed, a Liberal Southern Hero, and "The Southern Strategy" 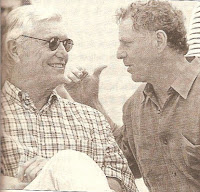 
An Alabama native, Tom was the grandson of a wizard in the Ku Klux Klan. His grandfather once killed a black man for sassing him at a neighborhood store. Tom's father, an agricultural scientist at Auburn, had a more moderate view toward blacks, telling his son that "blacks were good people". Even though Tom enjoyed recounting his father's moderate views, Tom became more the grandson than the son where race was concerned.

After graduating from Law School at UNC, Tom moved to South Carolina and got involved in the campaign to get tax exempt status for all-white academies as an alternative to court ordered integration of public schools. Tom's good work with the SC Independent School Association got the attention back home of George Wallace's brother Jack who invited Tom to join Wallace's 1968 presidential campaign. Tom was flattered and quickly became a top aide and strategist in the Wallace campaign. He was by Wallace's side when he has shot in 1968.

As Tom began to see what he later described as "raw hatred" on the faces of Wallace supporters, he grew very disenchanted with the movement. "Wallace knew what he was doing", Tom later said. "He had all the rhetoric, like 'they {referring the the media and the eastern establishment} look down there noses at us and call us peckerwoods and lintheads. We're none of that. We're just as cultured and just as refined as they are.'" Tom began to see that what he was experiencing was "way over the top", he said, and he eventually returned to his law practice in South Carolina.

During the culmination 1968 Presidential race, which Tom viewed from afar, the Wallace campaign got descimated as a result of the Nixon campaign employing, for the first time, what became known as "the southern strategy".

Here, Turnipseed describes "the strategy"; "The Nixon campaign put Strom Thurmond on television in a whole bunch of states that were very close. Old Strom'd come on TV and say, 'Well, you know, the governor is a good man, stands for the same things that Nixon does--but Wallace can't get elected, and Nixon can. Don't waste your vote.' With the race thing, the Nixon campaign took the Wallace message and co-opted it. As a result, the party of Lincoln became the party of David Duke and Trent Lott. The poor white guys who had voted for Roosevelt went for Nixon. The same poor working class whites had exactly the same economic interests as the blacks but they were divided by race".

Therein, you have a clear and concise explanation of the origin of the GOP's "southern strategy" (which, without question, has continued to be employed in various forms). Tom Turnipseed has gone on to become one of the preeminent civil rights attorneys in America. He has worked with the progressive Southern Poverty Law Center on numerous civil rights and "hate crime" cases. He has served as a State Senator in South Carolina. He most recently (the late 1990s) joined forces with the NAACP to have the confederate flag removed from atop the State House in South Carolina. He has his own liberal radio talk show.

Above is a photo of Turnipseed (on the left) with his cousin, Morris Dees, founder of the Southern Poverty Law Center. I personally heard Dees amusingly tell of one case where they jointly won a $37. million suit against the Klan in which a new Klan headquarters was handed over to a black family by the judge.

For Turnipseed, the former Wallace campaign strategist, Gov. Wallace's so-called death-bed apologies were not near enough. "Hell, he says, "what we did, and what I was involved with and helped carry out, deserves more action than apology. It deserves justice for the injustices we did".
Yes, it's indeed inspiring and compelling to see a person turn from that old life, towards justice.

(Interesting additional note:  A dark chapter for Turnipseed which I failed to mention above was his race for the congress in 1980.  In the Spencer-Tunripseed race, a young Republican strategist, Lee Atwater (father of the 1988 Willie Horton Horton ad), conducted a 'push poll' against Turnipseed reminding voters of his involvement with the NAACP and his shock treatment for a mental health condition when Turnipseed was a teenager.  This episode proved the turning point in a race which Turnsipeed lost, and some say that ended his political career.  A decade later, prior to his early death from brain cancer, Atwater wrote to Turnipseed, literally from his deathbed, to ask for forgiveness).

Below is a 'Tom Turnipseed For Governor' button I am pleased to have as part of my collection. 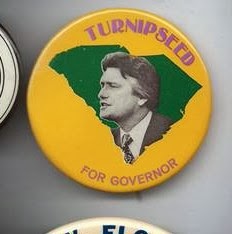