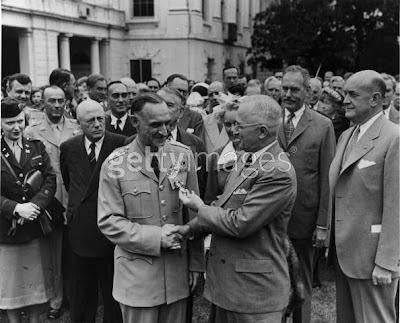 One of the great joys of my youth (ages 19 and 20) was to spend two summers working on the Cape Cod estate of General and Mrs. Lucius D. Clay. The estate, "Square Top", was in Chatham, Mass., a beautiful town on the sea, out on the "elbow" of The Cape. I was on Cape Cod to play baseball in the Cape Cod League, a great summer collegiate baseball league.
I got to know General Clay rather well. Although he spent the weekdays in New York City (he was a founding partner of Lehman Brothers) he flew to The Cape on the weekends to play golf and relax. The estate was very large and included several buildings, a boat house, and a two hundred year-old house in which they lived. It had 6 gardens and a peach orchard. General Clay was from Georgia and the peach orchard was very important to him.
General Clay, a direct descendent of Henry Clay of Kentucky, was a 4-Star Army General and was General Eisenhower's number two man in Europe during World War II. He was post-war Governor General of Germany. He coordinated the "Berlin Airlift" after the war. This was a critical airlift of supplies into West Berlin, which was "free" but was surrounded by communist East Germany.
General Clay was one of the old traditional Eastern Republicans and was a Rockefeller supporter in 1968, one of the summers I was on The Cape. He was an officer on the National Republican Committee. Although he opposed Nixon in 1968 in favor of Rockefeller, he was invited to the White House in the summer of 1969 (the other summer I was there) when his friend German Chancellor Willy Brandt was there for a State Dinner.
The above picture is of General Clay and President Harry Truman. President Truman is awarding him the Distinguished Service Medal for his role in the Berlin Airlift. General Clay died at Square Top in Chatham, Mass. at the age of 80 in 1978. I am pleased to recall with great fondness my summers on beautiful Cape Cod on the estate of General Lucius D. Clay.
(I would refer you to a related January 2010 blog, "I Don't Think This Is Kansas...Todo").
Posted by bbogodfrey17@gmail.com at 1:27 PM