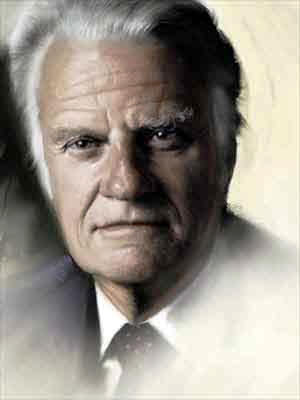 Well, I was brought up to revere Billy Graham, and to this day, while priding myself as a person with an open and free mind, I am so very proud to say that I still enthusiastically revere everything about him.

Like me, Billy is a native North Carolinian and a moderate Baptist. Refusing to join Jerry Farwell's so called "moral majority," Billy said, "I'm for morality but morality goes far beyond sex and politics to human freedom and social justice. We in the clergy know so very little to speak with authority on the issues of the day. Evangelist can't be closely associated with any particular party or person. We have to stand in the middle to preach to all people, on the left and right." Newsweek said in a 2006 article, "For Graham, politics is secondary to the Gospel."

Billy has had a personal audience with, and has prayed with, Presidents of the United States since Harry Truman. That's 12 American Presidents. President Obama just visited with him for private prayer in Montreat, NC last month. Billy was named #7 on the Gallup Poll of the most admired people of the 20th Century. It is amazing that Billy has, considering the news environment in which we live, managed to steer clear of virtually any controversy. Billy has received the Presidential Medal of Freedom and the Congressional Gold Medal. He has been named the "Greatest Living American" on several Gallup surveys.

Billy opposed segregation in the 1960s and refused to speak in segregated auditoriums. It was reported that he provided bail money to secure Martin Luther King's release from jail more than once in the '60s.

There will likely never be another Billy Graham. I once attended a funeral he did at First Baptist Church - Greensboro, and I felt like I'd been to a great religious revival. At age 93 now, in some ways it will be a sad day when Billy passes away. But without question, Billy will want us to celebrate his homecoming on that day, and to celebrate the hundreds of thousand of lives he touched and uplifted, and as us Baptist proudly say, and the souls he has saved. God Bless Billy Graham.
Posted by bbogodfrey17@gmail.com at 11:21 AM