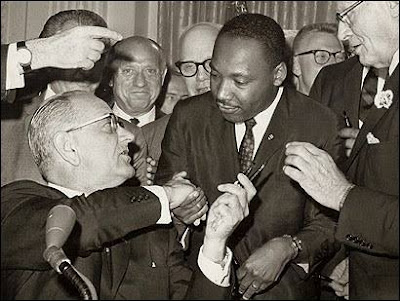 First pen goes to Martin Luther King as LBJ signs The Civil Rights Act of 1964, nearly 100 years after the Civil War ended. Dr. King was born 88 years ago today. I'm grateful my pastor read from Dr. King's last sermon, delivered Feb. 4, 1968, at his home church, Ebenezer Baptist in Atlanta, 'The Drum Major Instinct'. ....'Tell them not to mention my Nobel Peace Prize, my three or four hundred other awards. Just tell them to say I was a drum major....., a drum major for justice, a drum major for peace, a drum major for righteousness.....'.
Posted by bbogodfrey17@gmail.com at 8:26 AM No comments:

Shot From Haley Confirmation Hearing for the UN 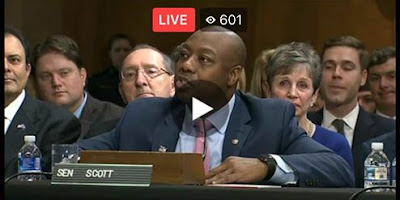 Son Rob, longtime aide (Deputy Chief of Staff / Director of Communications) to South Carolina Governor Haley, takes it in at Haley's confirmation hearing for US Ambassador to the United Nations.(To the left, behind speaker Senator Tim Scott, first African American senator from the South since Reconstruction, who is introducing her). Rob has had tremendous experiences and he is good at what he does.
Posted by bbogodfrey17@gmail.com at 8:24 AM No comments: 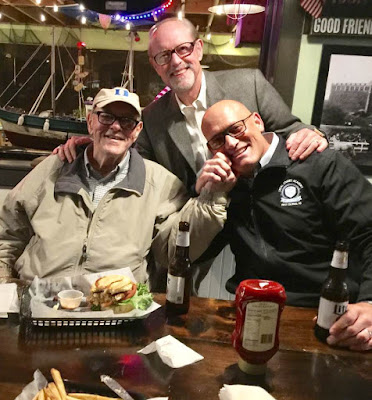 
I just finished reading 'Eve of Destruction' by James Patterson which is about the transitional year of 1965. It is a great read.

At the beginning of 1965, the U.S. seemed on the cusp of a golden age. President Johnson, who was an extraordinarily skillful manager of Congress, succeeded in securing an avalanche of Great Society legislation, including Medicare, immigration reform, and a powerful Voting Rights Act. But the sense of harmony dissipated over the course of the year. 1965 marked the birth of the tumultuous era we now know as "The Sixties," when American society and culture underwent a major transformation.

Turmoil erupted in the American South early in 1965, as police attacked civil rights demonstrators in Selma, Alabama. Many black leaders, outraged, began to lose faith in nonviolent and interracial strategies of protest. The U.S. rushed into a deadly war in Vietnam, inciting rebellion at home. Racial violence exploded in the Watts area of Los Angeles. The six days of looting and arson that followed shocked many Americans and cooled their enthusiasm for the president's remaining initiatives. As the national mood darkened, the country became deeply divided. By the end of 1965, the political scene was becoming redefined as developments in popular music were enlivening the Left.

The title of the book is taken from the Barry McGuire hit song "Eve of Destruction" released in 1965. The song captured the mood of much of the country. It became a controversial hit dividing America. The song was the first 'marriage' between rock music and protest. It signified that a mass movement among American youth 'was upon us', as Patterson expressed it.

After observing the Women's March on Washington (and in large and small cities around America and around the globe) for social justice, peace, and equality one day after the inauguration of Donald Trump, one cannot escape the parallels and similarities to the tumultuous, transitional, polarizing, uncertain times of today. Listen above to the 'classic'.
Posted by bbogodfrey17@gmail.com at 7:34 PM No comments:

Comparing a Couple of Presidential Eras, And a Statement on Trump

I am fortunate to have Tom Huston as a facebook friend. He is a fellow collector of American political memorabilia. He is one of the top collectors in the country. Tom was a Senior Advisor in the Nixon White House (pictured here with Nixon) and a close friend of William F. Buckley. He was one of the originial fixtures in the intellectual conservative movement of the 1950s and 60s.

Tom makes a keen observation about the how history will view the 28-year period of Presidents between Ronald Reagan and Donald Trump. He views it's significance, or lack thereof, similar to that of the period betweeen Abraham Lincoln and William McKinley.

His point, I believe, is that both eras are characterized by very transitional periods in which societal and historical forces at work disrupt, overshadow, and make difficult attempts at leadership. The transitional period after Lincoln was characterized by a failed and tumultuous attempt at the Reconstruction of America after a great American Civil War. The transitional period between Reagan and Trump has been characterized, as Thomas Friedman puts it, by an age of rapid acceleration and exponential change and disruption in the areas of technology, globalization, and climate, which has upended, confused, and made fearful lives and institutions. Tom would likely point also to weak leadership during both eras, but that is diffucult to judge and evaluate under such circumstances, in my view.

Here is Tom's thought-provoking and insightful observation: "A century from now historians will attach to the presidencies between Ronald Reagan and Donald Trump the same significance that they now attach to those between Abraham Lincoln and William McKinley. Of course, they will highlight the election of the first African-American president and may footnote the impeachment of Bill Clinton and the unique achievement of George W. Bush in presiding simultaneously over two losing wars and a cataclysmic collapse of the economy, but the accomplishments of these intervening administrations, such as they may be, will (at best) take second place to great social and technological forces that remade the country during this 28-year period."

In 2017, we continue to move forward in uncertain, transitional, rapidly evolving and changing times. We have very questionable, non-traditional, in my view, unprepared, naive, dishonest leadership in Donald Trump. We shall see where this formula takes us and whether this leadership can sustain in these continuing, unprecedended times, rivaled only by the age of Reconstruction in the last quarter of the 19th century.
Posted by bbogodfrey17@gmail.com at 7:09 AM No comments: