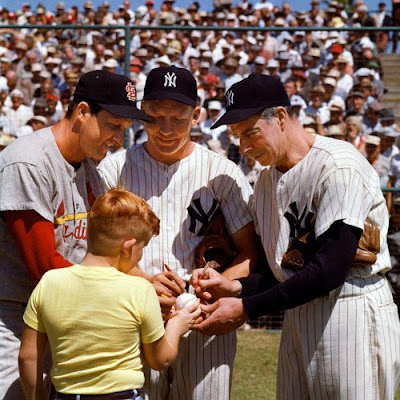 What a great photo on Opening Day 2011, capturing the essence of that which is most important in the great game of baseball. Have a great season!

Posted by bbogodfrey17@gmail.com at 6:22 AM No comments: 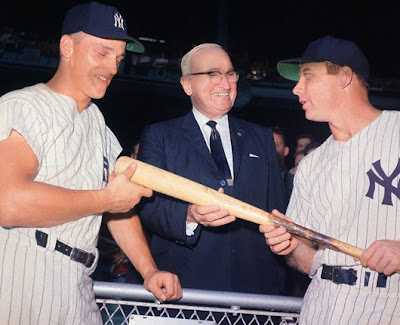 A very nice image capturing two of my most enjoyable interests, Yankee baseball and Democratic politics. Not certain, but I would date photo during '61 when Maris and Mantle were chasing Ruth's 60 HR record.

Posted by bbogodfrey17@gmail.com at 5:35 AM No comments: 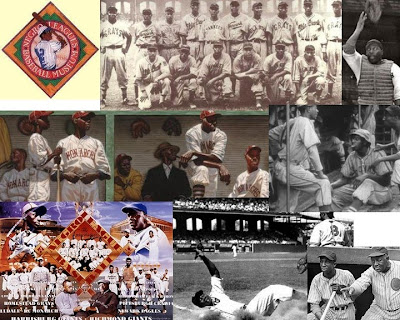 Posted by bbogodfrey17@gmail.com at 6:54 AM No comments: 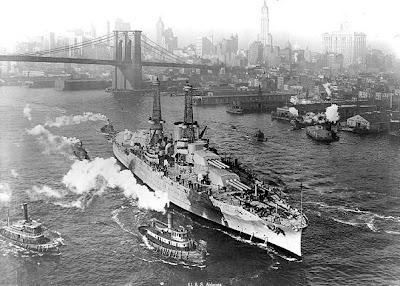 This is the USS Arizona in 1916 with the skyline of Manhatten in the background. Today, of course, the Arizona lies at the bottom of Pearl Harbor in Hawaii.

Posted by bbogodfrey17@gmail.com at 9:05 AM No comments: 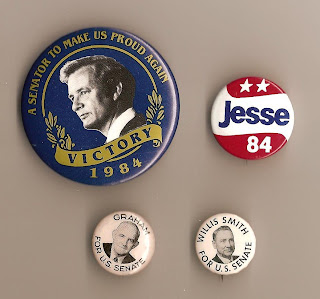 "It was during the 1950 North Carolina senatorial campaign involving liberal UNC President Dr. Frank Porter Graham and conservative Raleigh attorney Willis Smith that a young news director at WRAL named Jesse Helms came to prominence as a media figure. Helms covered the first Democratic primary struggle that year between Graham and Smith which Dr. Graham won. It featured flamboyant charges by Helms of communist taint and intellectual socialism against the distinguished former university President. Helms took a leading role in the run-off election.

'I went on the radio telling folks that supporters ought to get to Smith's home and encourage him to call for a run-off,' Helms said. WRAL ran announcements throughout the day about the rally. Several hundred people turned out. Smith, a former speaker of the NC State House, a prominent lawyer and chairman of the Duke University Board of Trustees, leaned toward bowing out after the crowd arrived. He announced he would make up his mind the following morning. During the period following the first primary, three Supreme Court rulings involving desegregation had come down. Those influenced Smith's decision to run.

The run-off campaign focused on blatant and exaggerated racial charges against Graham. Smith supporters circulated leaflets warning 'White People Wake Up'. Leaflets asked such questions such as, 'Do you want Negros riding beside your wife and daughters in buses, cabs, and trains? Negros going to white schools and white children going to Negro schools? Negros to occupy the same hospital rooms with you and your wife and daughter?' Some of the printed material, distributed to mill villages and industrial plants, featured photographs of black soldiers dancing and drinking with white women. One pictured a black man dancing with a woman who had the superimposed face of Mrs. Graham.

Smith defeated Graham is the bitterly fought run-off campaign, replacing Graham in the US Senate, who had been appointed to the Senate by Governor Scott in 1949 at the death of Melville Broughton.

Helms denied that either he or Senator Smith knew about or sanctioned the scurrilous campaign material. Others, however, have different memories. Judge James Bailey worked in the Smith campaign. He told one reporter that 'Helms contributed to practically every ad that was run.' Senator Helms is indignant today when critics link him with racist material circulated for Smith. He insists that Smith was the 'victim of a horrendously improper campaign that branded him a racist.'

The emotional backlash of the Smith-Graham campaign polarized liberals and conservatives in North Carolina for the first time. Whatever Helms' role may have been, the campaign advanced his career. One year later, he went to Washington as a staff assistant to Smith. Thirty-four years later, in 1984, Helms himself would take on another prominent NC liberal, Jim Hunt, in what may have overtaken the Smith-Graham campaign as the state's harshest and dirtiest campaign in history. On the coattails of Ronald Reagan, and again using racial innuendo, Helms beat Hunt with a narrow 51.7% of the vote. Some things seem to never change in North Carolina." 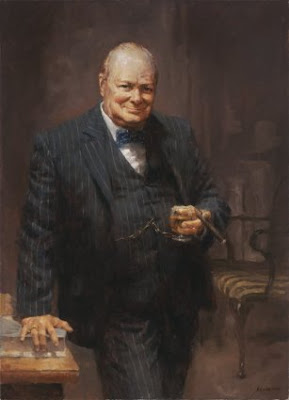 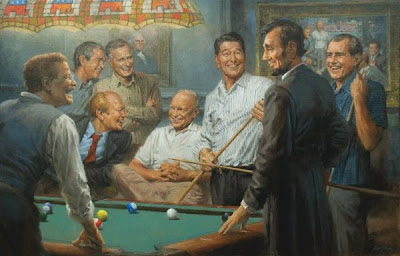 Posted by bbogodfrey17@gmail.com at 7:22 PM No comments: 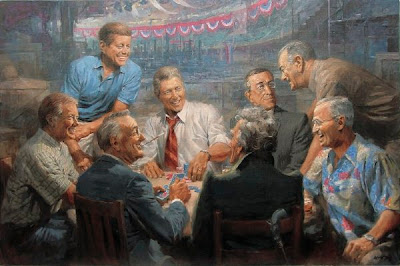 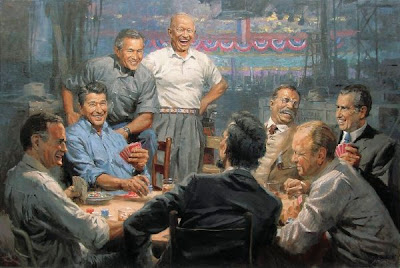 These are very cool paintings by Andy Thomas. The top one is "Poker Playing Democratic Presidents." The bottom painting is "Grand Ole Gang - Past Republican Presidents Playing Poker." Don't miss Andrew Jackson and Abe Lincoln with his backs to us. Fun paintings!
Posted by bbogodfrey17@gmail.com at 6:35 PM No comments: