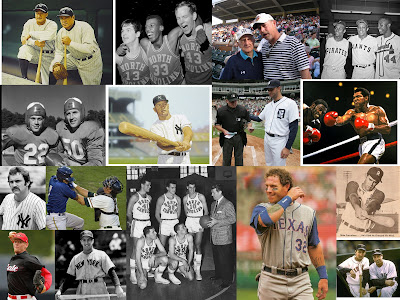 A favorite sports collage. What a group. Let me know if you are curious about any one in particular. I think you can name most all of them. Represents a great deal of what is important to me in sports.

A Few of Great Influence 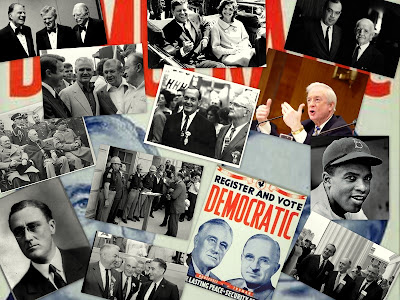 Posted by bbogodfrey17@gmail.com at 9:01 AM No comments:

Let's Wake Up - It's Not the Unions

The current assault on public employee labor unions has, of course, been exposed for what it is. It has nothing to do with balancing state budgets or reducing government spending. It is about power, as Paul Krugman has pointed out.

Krugman says, " In principle, every American has an equal say in our process. In practice, some of us are more equal than others. Billionaires can field armies of lobbyists; they can finance think tanks that put the desired spin on policy issues; they can funnel cash to politicians with sympathetic views (Koch brothers, for example). On paper, we're a one-person-one-vote nation; in reality, we're more than a bit of an oligarchy, in which a handful of wealthy people dominate. Given this reality, it is important to have institutions that can act as counterweights to the power of big money. Unions are one of the most important of these institutions."

Former Labor Secretary and Labor Economist Robert Reich says, "As long a Democrats refuse the talk about the build-up of wealth and income of the top level, and refuse to push increasing the top marginal tax rate on the super wealthy so they pay their fair share, Republicans will continue to convince people that it's all about big government and unions. The truth that must be told is that government spending has little to do with high unemployment, declining wages, falling home prices, and all the other horribles that have come to haunt most Americans."

"The reason the economy continues to be lousy for most Americans", Reich says, "is that so much income and wealth has been going to the very top that the vast majority no longer has the purchasing power to lift the economy out of it's doldrums. Average Americans aren't buying cars, aren't buying homes, aren't going to the malls. The richest 5 % are back in the stores, but a strong recovery cannot be built on the purchases of the richest 5%."

The truth is that as income and wealth have risen to the top, so has political power. Governor Walker's conversation with the hoax caller in which he "spilled the beans" about his real intent was very telling. The super rich have been using their billions to hoodwink the public, corrupt politics, and enlarge their oversized fortunes. They are bankrolling Republicans who want you to think that unions and government spending is the problem. Let's wake up.
Posted by bbogodfrey17@gmail.com at 6:41 AM No comments: 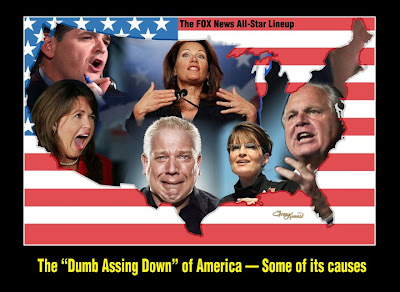 Recent surveys have shown Fox News guilty of spreading misinformation. They are deliberately disguising false information as news. No surprise here. The news business has become an entertainment industry. Be careful of what you consume in the name of journalism and factual news. My graphic artist friend Tracy Knauss captures the situation nicely in his piece above. 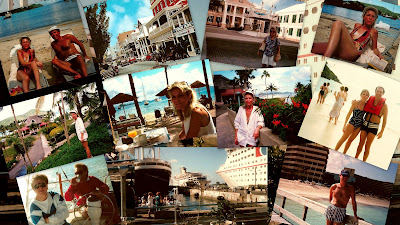 This is collage of photos from three Caribbean trips over the years. I have been blessed with good jobs, a good wife, and great times.
Posted by bbogodfrey17@gmail.com at 12:37 PM No comments: 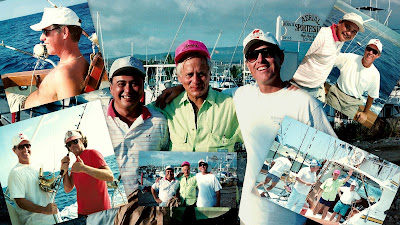 This is a great memory from marlin fishing off the Kona Coast of the Big Island of Hawaii. I am with Dick Schapp, Emmy winning ABC News sports journalist and author. It was quite a time.

Posted by bbogodfrey17@gmail.com at 12:30 PM No comments:

Willie Nelson Plays An Old One

This one puts a smile on your face. The old timers were sometimes a mess.

Posted by bbogodfrey17@gmail.com at 7:11 PM No comments:

Franklin D. Roosevelt in His Own Words

Listening to this FDR clip is a well spent 3 minutes. Talk about a beacon of hope, directness, leadership, moving a nation forward in a time of despair.......that's FDR. This clip captures the mood of the times. FDR went on to win the 1936 election against GOP candidate Alfred Landon with 60% of the popular vote and by carrying 46 of the 48 states. They said if the campaign had gone on another month FDR with have carried Canada.

Posted by bbogodfrey17@gmail.com at 12:39 PM No comments:

Congratulations to the Packers 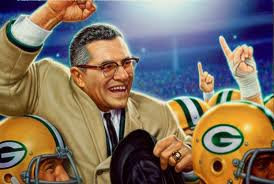 Congratulations to the Packers as the trophy named for the legendary Vince Lombardi comes home to his Green Bay. It was an excellent Super Bowl game. Now it is on to the national pastime of baseball!

Posted by bbogodfrey17@gmail.com at 8:19 PM No comments: 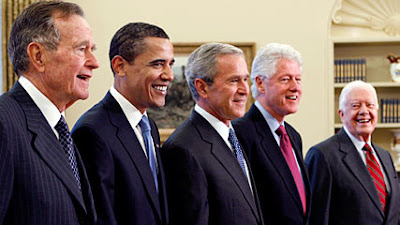 I like this photo. It is, of course, all of the living Presidents. Rarely do you get 5 together. It is easy to be critical of those who are willing to put themselves "in the arena." My observation of Presidential history since 1932 and the election of Franklin Delano Roosevelt is that, generally speaking, with the exceptions of Richard Nixon and Bush II, we have actually been very well served over the past nearly 80 years.

Posted by bbogodfrey17@gmail.com at 7:44 PM No comments: 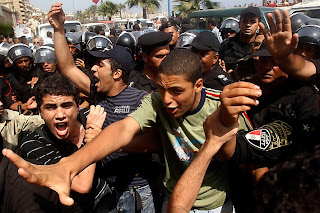 Egyptians, and free people around the world, are indebted to brave journalists who are on the front lines of the Egyptian revolution. They are putting their lives on the line. I have a always thought that embedded war correspondents and journalists were every bit as brave and critical to the success of a movement or a war as the participants themselves.
I am reminded of the civil rights movement in the South. It was not until pictures, TV transmissions, and stories of conditions and confrontations coming out of Alabama, and other deep south locations, that the nation said enough.
I am reminded of Vietnam, as night after night, transmissions from the battlefields of Vietnam into our living rooms began to make it clear that we were in a no-win situation. Then, it was when Walter Cronkite returned from Vietnam, with a brief commentary on the evening news, that the course of events in the war changed. LBJ said, "if I have lost Cronkite, I have lost America." It has been said that had more "light" been shed on conditions and events developing in Eastern Europe and Germany in the mid to late '30s, World War II may have been averted.
An aggressive, free, courageous press, with no underlying partisan or political agenda, is so critical to keeping the "people" in control in democracies. We must always be vigilant in demanding that a free, intelligent, robust press has full access to our leaders and to events as they unfold around the world. This keeps you and I , and all people who are concerned with democracy, fairness, and justice, in control of our destiny.
Posted by bbogodfrey17@gmail.com at 8:25 AM No comments: 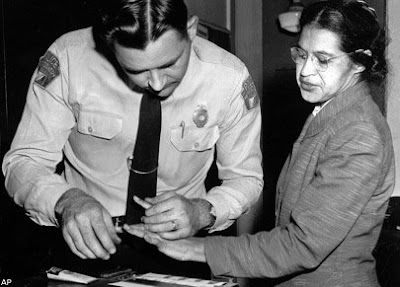 During this, the 51st anniversary week of the Greensboro Sit-Ins, I am reminded of the courageous Rosa Parks. On December 1, 1955, after refusing to give up her seat and move to the back of the bus in Montgomery, Alabama , she is arrested and finger printed. The segregated ways of old South began to crumble.

Posted by bbogodfrey17@gmail.com at 7:54 PM No comments: 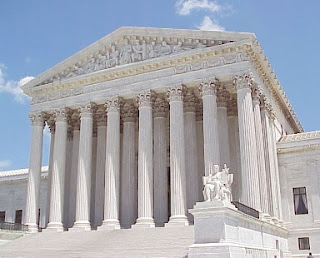 The Health Care Reform decision around the individual mandate will be one to watch closely. This very significant piece of social legislation will impact course of 21st century American domestic and social history. Once again it in the hands of the swing vote..... Anthony Kennedy.
Posted by bbogodfrey17@gmail.com at 10:27 AM No comments:

From Disney World to the Wedding Altar 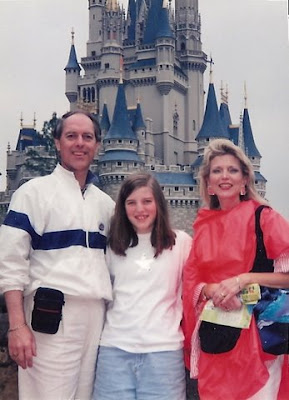 This is one of my favorite photos from sometime in the early '90s. Beware that daughters grow up and go from Disney World to the wedding altar. We are having fun helping Elizabeth, now age 28, plan for her May 28, 2011 wedding. It is a joy, as is she.

Posted by bbogodfrey17@gmail.com at 5:53 AM No comments: 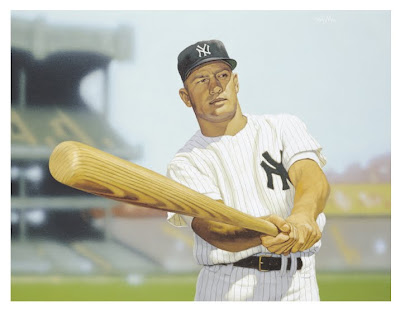 Spring Training is around the corner. Here is a great painting of Mickey Mantle by Arthur K. Miller. I am reading "The Last Boy -- Mickey Mantle and The End of America's Childhood" presently and it is wonderful. See you at the ballpark.

Posted by bbogodfrey17@gmail.com at 9:52 AM No comments: