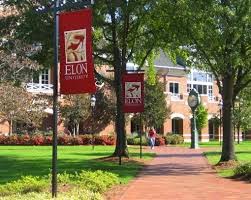 Sometimes I feel as though I am age 18 again on the Elon campus, especially on beautiful North Carolina Spring days like today.  I actually was age 18 as a student on the Elon campus, almost 50 years ago.  Now I am there participating in a wonderful LifeElon learning community for adults over age 50.

Today, as on many days, I took a long walk on the picturesque campus before class.  Sometimes I have coffee and read my Nook at the Elon Coffee Shop on main street. Often I browse through books and look for sales in the Barnes and Noble campus shop just off campus. I can be caught catching a glimpse at baseball practice, where I spent many days those many years ago.

Today our Life@Elon class was about gaining a better understanding of current events in the Middle East. The class was conducted by campus minister Rev. Dr. Jan Fuller, a Yale Divinity graduate and long-time resident of the Lebanon, and Rev. Dr. Ron Shive, Senior Pastor at First Presbyterian Church of Burlington. Their concise and clear outline of the foundation and history of the Israeli / Palestinian conflict, along with a brief history of Islam, was outstanding and informative.  They ended by proposing ways Americans might become engaged to become helpful. I feel much more informed about an area critical to world peace, understanding, and coexistence.

This Thursday members of our learning community will be provided the opportunity to see and hear the famous and popular Astrophysicist Neil deGrasse Tyson.  He currently hosts a popular science television program, in addition to being a great spokesman and proponent of climate change and it's impact, which is an area of great concern and interest to me.

I am fortunate to be part of this a great Elon University adult learning community. Elon has been important in my life, and as I approach age 67, it continues to be.  How wonderful.
Posted by bbogodfrey17@gmail.com at 5:57 PM No comments:

I had a good day Friday.  I attended the memorial service for friend Fred Williams, a pillar of the community and the church, who was born in 1915, 100 years ago.  The service was conducted by my wonderful pastor, Rev. Alan Sherouse, a 30-something, born in the 1980s.  Alan nailed it, knocked it out of the park. It was a wonderful worship service, a celebration of a fascinating 20th century entrepreneurial journey underpinned by devote Christian faith. It was topped off for me by having lunch with another wonderful friend who was born in 1925, 90 years ago (I had taken him to the service).

The best part of the day was seeing my Uncle Warren Bass, Fred's best friend, born in 1921, 94 years ago.  In my family (among his generation), and among most of his friends, Warren is the last man standing.  He has been a rock of the family. Such an example. My day caused for such reflection, such introspection, such feelings of blessing and gratitude.

These guys grew up in difficult times, the Great Depression, World War Two, the beginnings of America's ascension.  They did so well. They did what they had to do. To be around them, to listen to them, to observe their humility, is a such blessing.  Due to 'father time', such experiences will be, at this point, short-lived. They are leaving us, literally, daily.

The friend I had lunch with, Ray Anderson, is a 1949 Georgia Tech graduate who grew up on a 25,000 acre plantation outside of Memphis.  He married a New Orleans girl 65 years ago.  He is a devote Christian, his son a pastor in Macon, he's an avid Braves and Georgia Tech fan, an industrial engineer by trade, overseer of the Triad Montenyard community for 40 years, an overall wonderful, interesting guy.

But then, there is Uncle Warren.  The last man standing.  In my family, there was, to say the least,  maverick, interesting characters in that generation, all unique, leaving mark and impression on the world and on all of us.

But then, Warren, the last man standing. Thankfully, I'll see him and I'll visit with him Sunday, at the First Baptist Church of Greensboro.

If you have occasion to be around any pre-1925 born soul in the coming weeks, listen, observe, be grateful.  It'll make your day.

Posted by bbogodfrey17@gmail.com at 7:57 PM No comments: