The First African Americans in Congress 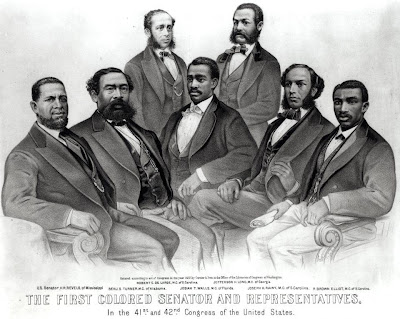 On February 25, 1870, exactly 143 years ago today, Hiram R. Revels was sworn into the U.S. Senate, making him the first black person to ever sit in Congress.

After the Reconstruction Act of 1867 was passed by a majority-Republican Congress, the South was divided into five military districts and all men, regardless of race were granted voting rights. Revels was elected by the Mississippi legislature, and seven black representatives were later elected for states like Alabama, South Carolina, Florida and Georgia thanks, in large part, to the support of African American voters.

Revels and some 15 other black men served in Congress during Reconstruction, and more than 600 served in state legislatures, while hundreds held local offices.

The Reconstruction Era is an engaging study in southern history, albeit complicated and prone to varied interpretation and analysis.  While 1877 is the usual date given for the end of Reconstruction, some historians extend the era to the 1890s. Reconstruction is unanimously considered a failure, though the reason for this is a matter of controversy.

- The Dunning School (in history department at Columbia University) considered failure inevitable because they felt that taking the power away from Southern whites was a violation of republicanism.

- A second school sees the reason for failure as Northern Republicans' lack of effectiveness in guaranteeing political rights to blacks.

- A third school blames the failure of not giving land to the freedmen so they could have their own economic base of power.

- A fourth school sees the major reason for failure of reconstruction as the states' inability to suppress the violence of Southern whites when they sought reversal for blacks' gains. Historian Nicole Etcheson points to the "violence that crushed black aspirations and the abandonment by Northern whites of Southern Republicans." Etcheson wrote that it is hard to see Reconstruction "as concluding in anything but failure." Etcheson adds, "W. E. B. DuBois captured that failure well when he wrote in Black Reconstruction in America (1935): 'The slave went free; stood a brief moment in the sun; then moved back again toward slavery.'"

Historian Donald R. Shaffer maintained that the gains during Reconstruction for African Americans were not entirely to no avail. The legalization of African American marriage and family and the independence of black churches from white denominations were a source of strength during the Jim Crow era. Reconstruction was never forgotten in the black community and remained as a source of pride and inspiration well into the mid and late 20th century.