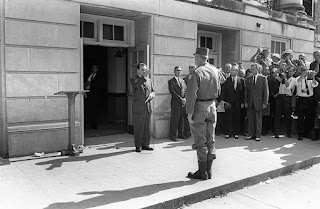 The photos contained in the attached Atlantic Magazine article (the link is here) are some of the most wonderful historic photos a I have seen in sometime.  They are from 1963, 50 years ago.  What a time that was.  I was age 15 and becoming every engaged with the world around me.  The events of that era certainly shaped the person I became. For that I am grateful.

As the article introduces the photographs, "A half century ago, much of the news in the United States was dominated by the actions of civil rights activists and those who opposed them. Our role in Vietnam was steadily growing, along with the costs of that involvement. It was the year Beatlemania began, and the year President John F. Kennedy visited West Berlin and delivered his famous "Ich bin ein Berliner" speech. Push-button telephones were introduced, 1st class postage cost 5 cents, and the population of the world was 3.2 billion, less than half of what it is today. The final months of 1963 were punctuated by one of the most tragic events in American history, the assassination of President Kennedy in Dallas, Texas. Let me take you 50 years into the past now, for a look at the world as it was in 1963."

Click the link provided above and go on a photographic voyage back into a time critical in 20th century history and a time critical to shaping the nation and the people we are. What a time it was.
Posted by bbogodfrey17@gmail.com at 6:59 PM