The Bonus Army - A Shameful Episode in American History 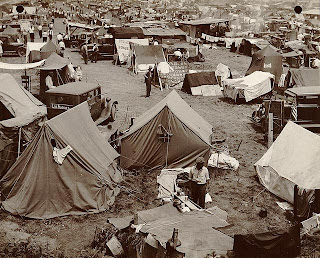 The story of the Bonus Army episode in 1932 is very compelling.  In my view, it is a story to which history has not done justice.  For me, it is near emotional to listen to the NPR "live" radio diary recorded transcript (found at the above highlighted link) of this historic Washington occupation by thousands of poor and desperate World War I veterans.

In short, in 1932, during The Great Depression, a group of WWI veterans in Portland, Ore., rallied the Bonus Army to Washington to lobby for early payment of their promised bonuses. They set up camp along the Anacostia River that May. But by July, officials, unbelievably sent by Hoover and led by MacArthur and Patton, lost patience and went into the camp to evict the marchers. It turned violent. A soldier torched a tent, and the Army began torching everything still standing. There were deaths.

In my estimation, the event was a low point for veterans affairs and a low point in the treatment of American citizens who were only intent on having their case heard and acted upon.  If you are unfamiliar with the story, which many seem to be, do yourself a favor and read the above attached NPR account of the fascinating, albeit disturbing, episode in American history.

As you imagine, and hear firsthand accounts, of Generals MacArthur and Patton coming down Pennsylvania Ave on horseback, sent by an inept Commander-in-Chief Herbert Hoover, followed by active U. S. Army troops, intent on removing poor, hungry, heroic, World War I veterans during The Great Depression, veterans who were "occupying" a "shantytown / Hooverville" in our nation's capital in an effort to be heard, hopefully you will become less angry than I became at the thought of such a sight.

Yes, a compelling American story for which shame is in order.  How were we allowed to forget?
Posted by bbogodfrey17@gmail.com at 5:59 PM