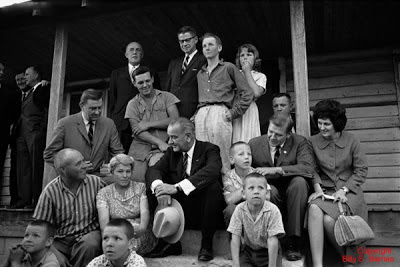 This is a wonderful, historical, political North Carolina photograph. I love old historical photos.  Here Vice President Lyndon Johnson (center holding hat) and NC Governor Terry Sanford (seated to his right) meet with a large family in Rocky Mount, NC in the early 1960s.  The war on poverty had begun as part of what would become LBJs Great Society initiative and this was likely a photo opt related to that effort.

Sanford was an early southern supporter of the Kennedy/Johnson administration.  He gave the seconding speech for JFK at the 1960 Democratic Convention.  North Carolina has been blessed over the years with great "New South" progressive leaders (with a few recent, notable exceptions).
Posted by bbogodfrey17@gmail.com at 6:55 PM