Above is a wonderful William Jenning Bryan for President ribbon from 1896.  It is a prized part of my political item collection. A "Veteran Soldiers Club" piece, it was most assuredly worn by a veteran of the American Civil War. There are some condition issues, but it is intact, and after all, it is about 118 years old.

Bryan was a leading American politician from the 1890s until his death. He was a dominant force in the populist wing of the Democratic Party, standing three times as its candidate for President of the United States (1896, 1900 and 1908).  In his three presidential election bids, Bryan received a total of 493 electoral votes - the most of any candidate in American history who never won the presidency

Bryan was one of the best known speakers of his time, and he became a fixture of the Democratic party and a hero to the common man.  Bryan's participation in the highly publicized 1925 Scopes Trial served as a capstone to his career.

Below is a great shot of opposing counsels Clarence Darrow and William Jennings Bryan during the Scopes 'Monkey' Trial of 1925. Even then, in this highly charged trial about the issue of evolution, these fierce adversaries seem cordial and respectful of one another, a trait seldom seen today it seems. 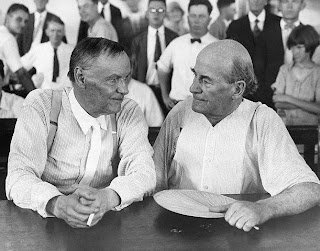