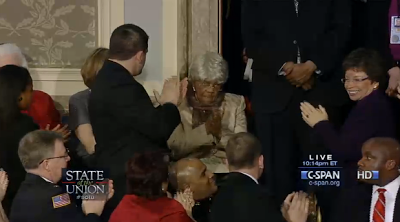 The state of the union, with the possible exception of a lingering debt and deficit and slow jobs growth, appears strong and moving in the right direction.  The President's 2013 State of the Union address was one of his most inspiring and best speeches, in my view.

For me, the most inspiring moment was the introduction of the 102-year old voter from Florida who was the guest of the President and the First Lady.  She is a voter who stood in line for 4 hours in Florida in order to exercise her hard earned right to vote, as Florida Gov. Scott seemed to do all he could to make the process difficult.  The President used the moment to announce the formation of a bi-partisan commission to address the issue of improving the voting process in America.
Posted by bbogodfrey17@gmail.com at 5:33 AM