The Election Season Has Gotten Rather Quiet 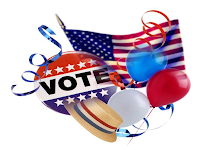 As I see it, there does not appear to be much excitement or discussion on the upcoming mid-term election. Facebook is rather quiet. Letters to the editor are few. Candidate debates have become yawns.
There are some "off the wall", unconventional, fringe candidates who stir curiosity. That some of them might occupy seats in the esteemed United States Senate where giants such Daniel Webster, John C. Calhoun, Henry Clay, Lyndon Johnson, Barry Goldwater, Everette Dirkson, Mike Mansfield, and Hubert Humphrey have served, is disturbing, to say the least, to a political junkie and history buff like me.
I think the reason for the lack of interest and excitement is simple. There has seldom been a time when the choice was more clear. This election is clearly a choice between old policies versus new directions which have been undertaken. This election is clearly about policies that got us into the dilemma we are in, both domestically and in foreign policy, verses those policies which have "picked us up" and gotten us moving down the road. It is about policies of the past, which put us "in the ditch", verses new policies which have gotten us going again. It is about about successful investment we have made in our nation in an effort to create a climate in which America is once again moving forward. Like the premise of this blog, it is rather simple.
TARP, the Recovery Act or Stimulus, the auto industry assistance, all took political courage. Finally tackling Health Care Reform in an environment of "no more new programs" took political courage. Using political capital to take on and reform Wall Street took political courage. Our much less arrogant attitude toward the rest of the world has moved us forward as we continue to regain lost influence with other nations of the world.
This mid-term election is clearly about the failed policies of the past versus new policies which have gotten American moving again. I hear it among employers with whom I meet. I hear it at industry meetings I attend. The choice is clear. The electorate doesn't appear moved to debate it. It is rather black and white. This is why it is rather quiet.
America is probably divided 50/50 on the question the "go back versus go forward". The problem is that so few participate in the electoral process. Of those who do participate, the question becomes..........will more of those who would have us go back, or will more of those who would have us go forward, turn out. I will let you know on Wednesday, November 3.
Posted by bbogodfrey17@gmail.com at 5:47 PM