Who Will It Be For The GOP 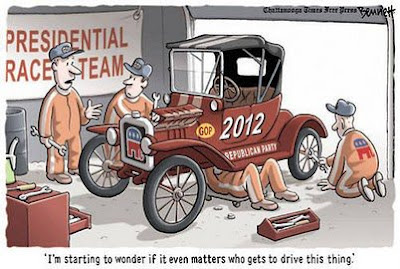 Here is another cartoon for the morning. As indicated by the old car, the GOP seems to be taking the nation backwards, and, considering their chances against a broad-based Democratic incumbent nominee in Barack Obama, it probably doesn't not matter who drives the car, the President appears to be the odds on favorite for re-election.

As those who follow my blog can fairly easily discern, I am supportive of the President. I am also becoming very concerned with the tone of Newt Gingrich's campaign and his increasing support among Republicans. He is a very harsh, bitter, mean-spirited candidate. He does not reflect the goodness and the values of the American people. He would not at all well represent our values on the world stage. We are not electing a harsh, condescending debater-in-chief .

Mitt Romney appears to be a solid, steady, bright, very Presidential candidate. Although I have policy differences with him, I could certainly be supportive of him if he were elected President. Very conservative Republicans, due to their very narrow, rigid view of the world, are having problems supporting a more moderate Republican. His appeal to independents, an important segment of the electorate, makes him an attractive option for mainstream Republicans who clearly understand the process.

On Saturday, I will be in Columbia for the South Carolina primary and for a Romney election night party. My son is on Governor Haley's senior staff and he his very involved in the process. I will be there primarily to spend the day and night with Rob, but the visit will afford me the opportunity to see the process up close and be apart of the excitement associated with a very important phase of our democratic process. All of the candidate's will be in town, as well as press from literally around the world.

Saturday's result will go a long way to determining who will take the wheel of the old car in the cartoon above for the 2012 GOP. For the sake of our system, it is my hope the the GOP takes a turn in the old car that better reflects the more positive, good attributes of the American people.....as referenced in Lincoln's first inaugural address, "the better angels of our nature."
Posted by bbogodfrey17@gmail.com at 3:28 AM