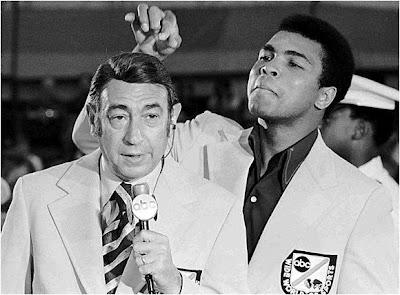 Happy 70th Birthday to "The Champ." Ali was "The Greatest." He and Cosell were quite a pair. They helped make each other. They played off one another so well. Ali, among much, was the first media savvy, entertainer/athlete, although Ruth wasn't bad at it.

Ali was controversial. I think that is why I liked him so much. To watch him box in his youth was to watch art, dance, ballet, overwheming power and speed, physical grace. He was a master......"The Greatest."

Regarding Ali and Cosell, Jim Scott, the great local sports historian and announcer, said it so well, "a white guy, a black guy; a Jewish guy, a Muslim; Midtown, Midwest; Cornell, cornfields; somehow they combined to create something even greater than their parts."