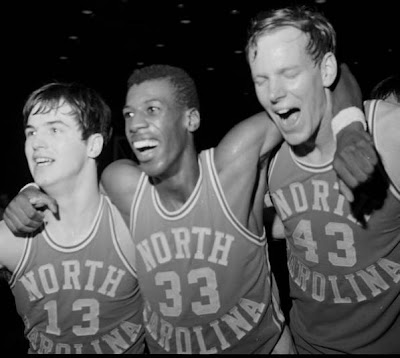 This is a great middle of the winter picture. These guys played at UNC when I was in college (late '60s). On left is Dick Grubar. Dick came to UNC from upstate New York and upon graduation came to work in Greensboro for Weaver Corp. and has remained here. He has been very active in the community, having served on the City Council. I see him at the gym regularly.

In the middle is legendary Charlie Scott. Charlie was the first black basketball player at UNC. Like all trailblazers, I am certain he had to withstand many injustices. He was a great player and person. On the right is Rusty Clark, 6'10" center from Fayetteville. Good memories.

This picture was taken after they won a Final Four game in Los Angeles in 1968.
Posted by bbogodfrey17@gmail.com at 12:50 PM