Writings of A. Bartlett Giamatti 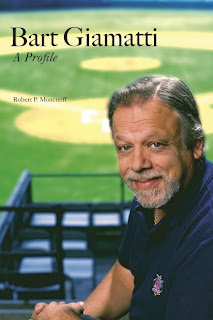 
Giamatti's passion for baseball surpassed even his academic zeal. His baseball writings are classic and will stand time. For those of us who love baseball, who once again struggle through it's winter absence, here are selected excerpts from Giamatti's "A Great and Glorious Game":


"It breaks your heart. It is designed to break your heart. The game begins in the spring when everything else begins again, and it blossoms in the summer, filling the afternoons and evenings, and then as soon as the chill rains come, it stops and leaves you to face the fall alone. You count on it, rely on it to buffer the passage of time, to keep the memory of sunshine and high skies alive, and then just when the days are all twilight, when you need it most, it stops. Today, October 2, a Sunday of rain and broken branches and leaf-clogged drains and slick streets, it stopped, and summer was gone."


".......That is why it breaks my heart, that game--not because in New York they could win because Boston lost; in that there is a rough justice, and a reminder to the Yankees of how slight and fragile are the circumstances that exalt one group of human beings over another. It breaks my heart because it was meant to, because it was meant to foster in me again the illusion that there was something abiding, some pattern and some impulse that could come together to make a reality that would resist the corrosion; and because, after it has fostered again that most hungered-for illusion, the game was meant to stop, and betray precisely what it promised.


"Of course, there are those who learn after the first few times. They grow out of sports. And there are others who were born with the wisdom to know that nothing lasts. These are the truly tough among us, the ones who can live without illusion, or without even the hope of illusion. I am not that grown-up or up-to-date. I am a simpler creature, tied to more primitive patterns and cycles. I need to think something lasts forever, and it might as well be that state of being that is a game; it might as well be that, in a green field, in the sun."


From "A Great and Glorious Game: Baseball Writing of A. Barlett Giamatti".