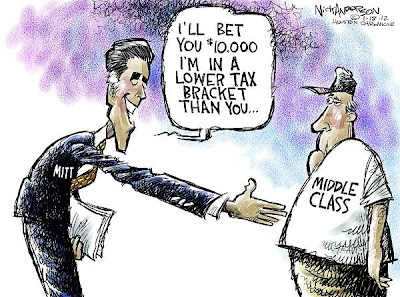 A cute cartoon from today's paper about Governor Romney and his disclosure that he pays around 15% in federal tax on the basis that most of his income is capital gains. And, of course, his widely talked about $15,000 bet challenge to Rick Perry in one of the debates.

Romney, actually a good candidate in a year when the GOP field is quite weak, is coming under increasing attack as we approach Saturday's important South Carolina primary. We are hearing about his off-shore bank accounts, his failure to release his tax returns, his millions of dollars in contributions to the Mormon church, his 15% effective tax rate, on and on.

Look to hear much more about Bain Capital and leveraged buy-outs during the general election, much more than you would ever want to know about either of them.
Posted by bbogodfrey17@gmail.com at 7:45 PM