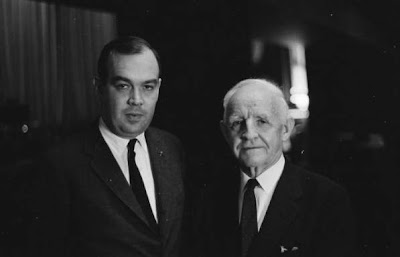 I would never suppose to discuss or write very much about the legendary life the great Dr. Frank Porter Graham. I certainly did not know him. You can google him, read his great biography by Warren Ashby, or read what others have written about him, like William Friday.

But I have never known of a North Carolina public figure who was talked about in such endearing, almost reverent ways. I suppose Dr. Billy Graham (no kin, of course) would rival him in that regard, but you would expect to hear such of Billy.

I will share this one descriptive passage I ran across recently by William Snider, former Executive Editor of the Greensboro News and Record, and a student of Dr. Graham. This concise statement says so much about Dr. Graham, in the way you hear so many others express similar affection and admiration:

"Charm of personality was inadequate to describe it. Built into Graham was a certain ironclad goodness, not puritanical nor sanctimonious, which stirred men and women to strive to be better than they were. He was a rumpled suited little man with crinkly, smiling eyes, and a bottomless faith in God's love and in man's potential."

I hope we have some Dr. Frank Porter Graham's walking among us today. I believe we do. Goodness such as Dr. Graham possessed certainly was contagious. It has withstood time and flourishes among those influenced by his admirers and followers.

Dr. Graham is pictured above with a great admirer and student at UNC during Dr. Graham's tenure as University President, the late, legendary CBS New journalist, Charles Kuralt.
Posted by bbogodfrey17@gmail.com at 12:33 PM