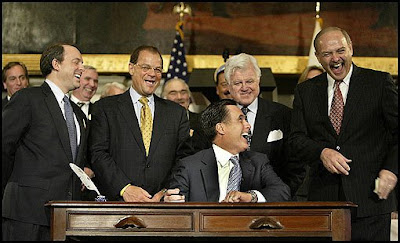 Well, during the general election, without question, as Ricky Ricardo would say, Mitt is going to have some "splainin" to do.

Tonight with the Iowa caucuses, the 2012 presidential nomination process is unofficially kicked off. I really enjoy following the process and it is critically important in my view. My son is involved in the process at the very highest levels. That makes it even more interesting for me to stay close to.

On the national health insurance reform discussion, I continue to think Mitt had it right in Massachusetts. Universal coverage is critical, and the individual mandate is critical to achieving the universal coverage. I have been in the health insurance / managed care business for over 3o years. The health care delivery system in America is clearly broken and the President's Patient Protection and Affordable Care Act of 2010 (known as 'Obamacare' to opponents of it) is a very good start in my view.

We will see how the election season goes. My guess is you'll see the photo above quite a few times during the general election.
Posted by bbogodfrey17@gmail.com at 1:22 PM