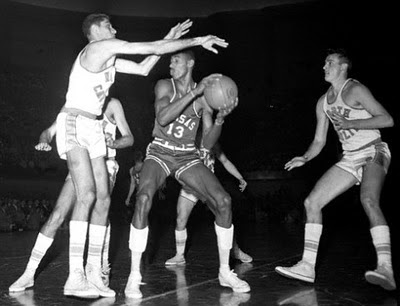 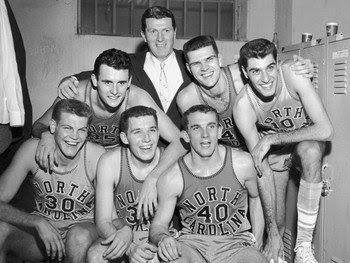 Here are a couple of cool mid-winter photos as I count the days to a March trip to baseball Spring Training. In 1957, the early years of television, the UNC basketball team made the trip to Kansas City, Missouri to play the University of Kansas for the NCAA National Basketball Championship.

The game was televised and nearly everyone in North Carolina, who could find a TV, watched. The all-white UNC team (well before team sports integration in the South) went up against a Kansas team led by a 7' 2" African American player. His name was Wilt Chamberlain. The game went into triple overtime. Carolina won 54-53 and remained undefeated with a 32-0 record. I sat on the floor right in front of our black and white TV and enjoyed every minute of a thriller.

Walt Chamberlain was named the tournament's Most Valuable Player, went on to once score 100 points in an NBA game, and became a 20th century American sports icon. He is pictured above on the move.

The UNC team was led by the legendary Frank McGuire. The team is pictured above with Coach McGuire: Lennie Rosenbluth - Captain (upper right), 6' 8" Joe Quigg (next to Rosenbluth; he had dubious task of matching up against Chamberlain at center), Pete Brennan, Tommy Kearns, and Bobby Cummingham.
Posted by bbogodfrey17@gmail.com at 4:27 PM