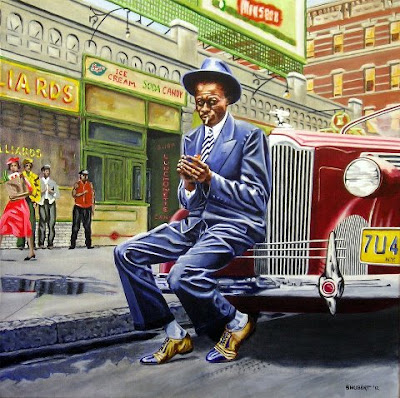 What a wonderful painting of one of the most colorful and cool players in the history of baseball.  Satchel Paige began his career in 1926 with the Chattanooga Black Lookouts of the Southern Negro Baseball League.  He became legendary, often pitching both ends of a doubleheader, later becoming the biggest draw in the Negro Big Leagues.  He played his first game in the Major Leagues at age 42, after Jackie Robinson finally broke the carrier barrier in baseball.  Satchel pitched his final professional game at age 56 for Peninsula of the Carolina League in 1966 against the Greensboro Yankees.

Thankfully Satchel was inducted into The Baseball Hall of Fame in Cooperstown.  He was such a character of our times.  A great Satchel quote is, "Sometimes I sits and thinks, and sometimes I just sits." In the above painting, appears he may just be sitting.  The Atlanta Braves allowed Satchel to travel with the team as a pitching coach in the late 1960s, allowing him to build up some pension credits.  Kudos to the Braves.
Posted by bbogodfrey17@gmail.com at 6:51 PM