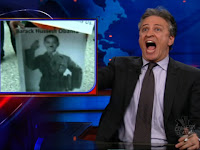 Today Rob sent me a picture of he and former Virginia U.S. Senator John Warner taken together at a function. I am reminded of what a great centrist Republican Warner was. He weighed issues on their merit, he listened closely to others, he was highly regarded by fellow legislators, and he cast many courageous votes. For example, he saw fit to oppose the nomination of Judge Robert Bork to the Supreme Court.

American politics has become so toxic today. There is no place for a John Warner today. Health Care Reform (HCR) has become no more than an "us versus them" exercise in Washington, regardless of the possible merits of the bill. Senator Jim DeMint has said that he will run on a pledge to repeal HCR, no matter how it looks, and the GOP said they will vote in unison against it, no matter how many of their ideas are included.

What if there were a leader or a President with whom most everyone agreed on virtually all issues? Is that the goal? That is probably not the goal. Healthy debate and constructive opposition is essential to developing sound public policy in a diverse democracy.

Drafting and passing effective legislation should be done based on sound, eternal principles. Those principles should be well-founded. They should be rooted in fairness and in the constitution. They should reflect wise precedent and be rooted in respect for the views of ours. To that end, the approach should be, as Dr. Covey would say, based on the concept of "seeking first to understand, then to being understood". This, and the keen understanding of the views of others which results, is the basis for effective interaction. What results will generally satisfy the objectives for well-balanced legislation, benefiting the largest majority of citizens.

The other missing ingredient today is trust. Legislators must build trusting relationships with each other. This was the case 50 years ago, but not today. Legislators 50 years ago would stay in Washington over the weekend and socialize together. They would ride the train together to and from Washington. They got to know each and each other's families. That relationship and that trust which developed was the basis for cooperation and it is missing today. It needs to be restored.

Let's keep encouraging and hoping for more balanced and effective legislation, and legislators, in Washington, both based on sound principles and trusting relationships. And Senator Warner, thanks for your life of service.... and the reminder.
Posted by bbogodfrey17@gmail.com at 8:47 AM