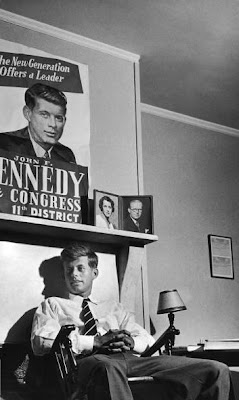 Nice photo of John F. Kennedy sitting under a congressional poster for one of his races for congress. He served the 11th congressional district of Massachusetts in the U. S. House of Representatives from January 3, 1947 to January 3, 1953. Tip O'Neill took over that seat in the House in 1953, and Kennedy was elected to the U. S. Senate.