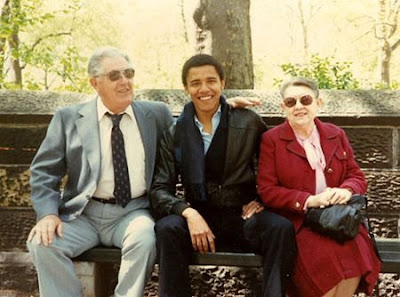 This is one of my favorite pictures, Barry Obama with his grandparents, who, upon the death of his mother, raised him and looked after him. All too typical a story in mid-to-late 20th century America.....a kid from an interracial marriage being raised by a single mother, then by grandparents.

What is not a typical American story is that of a multi-ethnic and bi-racial kid attending Columbia University, Harvard Law and becoming president of Harvard Law Review, teaching law at the University of Chicago, becoming a community organizer and civil rights attorney in southside Chicago, being elected State Senator at very young age, then United States Senator, and then President of the United States at age 47.

Quite an amazing story of human circumstance and human achievement.......only in America. By leaps and bounds, the most intriguing and capable American public servant and figure of my lifetime.
Posted by bbogodfrey17@gmail.com at 1:52 PM