Maybe the Greatest Movie of All Time 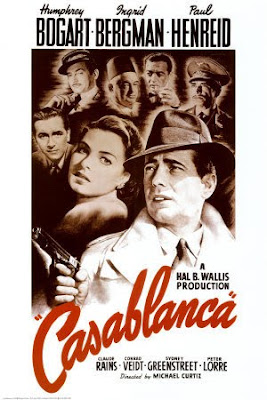 Casablanca, a 1942 American romantic drama set during World War II, ranks near the top on all lists of the all-time greatest films. It won three academy awards, including Best Picture. It starred Humphrey Bogart and Ingrid Bergman. The classic has only grown in popularity over the years.

Six legendary lines from Casablanca appear on the American Film Institute's top film lines of all- time, including, "Play it again, Sam....for old time sake. Play it, Sam, play, 'As Time Goes By'." "Here's to you, kid." "Of all the gin joints in all the towns in all the world, she walks into mind."

No doubt, a gem of American film making.
Posted by bbogodfrey17@gmail.com at 7:12 PM