A Great Babe Ruth Story....Told to Me Personally 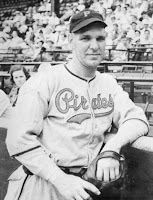 I love baseball........and good baseball stories. This is a great baseball story. Although I had read the story before, I was fortunate to have it told to me personally by Mace Brown. (That's Mace to the left, in has Pittsburgh Pirates uniform in the late 1930s).
Mace was in the hospital here in Greensboro, his hometown. It was January of 2002. My dear Mother was in the same hospital, on the same floor, at the same time. This gave opportunity for me to hear the story firsthand.
After a great playing career with several big league teams which spanned 1935 to 1946, Mace had been a major league scout in this region. I had seen him often at my American Legion and college baseball games. Everyone knew him by sight very well.
When I was visiting with my Mother in the hospital on one occasion, I saw Mace in his room. I walked into his room and we visited for a while. Then I finally said, "Mace, tell me that Babe Ruth story." He was glad to oblige.
He began, "I was a rookie with the Pirates and it was May 25, 1935. It was The Babe's last big league game. We were playing at old Forbes Field in Pittsburgh. Alot of people have forgotten, Babe finished out his career in the National League with the Boston Braves." He seemed to remember the details like it was yesterday.
He went on. "Well, it's hard to believe, but The Babe hit three home runs in his last game that day....three. His third one went completely out of Forbes Field stadium. It was quite a shot. After that last one, Babe left the game and headed to the showers. You had to pass through the Pirates dugout to get to the showers. Well, as he was coming through, The Babe, very tired, spotted an empty seat on the Pirates bench and flopped down.....right next to me. After a moment or two, he turned, looked over and said, 'son, that last one felt pretty good.' I was thinking to myself, well I guess it did!! They'll still be looking for that ball next week!!"
Mace died March 24, 2002, at the age of 92, two months after I stopped by his room. I am so thankful I stopped by. Mace was buried in Westminster Gardens in Greensboro, same place my Mother is buried. He was buried in fitting style...... in his Boston Red Sox uniform. This all reminds me, I need to get by and see an ailing Sonny Cashion....a baseball story for another day.
Posted by bbogodfrey17@gmail.com at 11:56 AM