The Great Antics of Bill Veeck and Little Eddie Gaedel 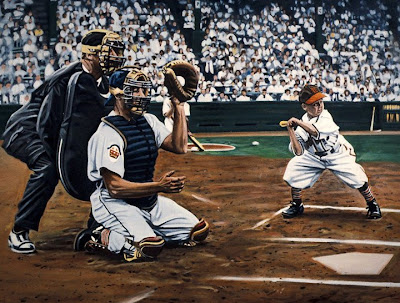 If we're not careful, stories like the one about little Eddie Gaedel will be forgotten. Like my good friends Miles Wolff and Donald Moore, major league team owner Bill Veeck was a great promoter.

In 1951, Veeck was looking around trying to find ways to draw fans into the ballpark. On Sunday, August 19, during the second game of his St. Louis Brown's doubleheader, Eddie Gaedel was wheeled up to the plate in a giant cake out of which he stepped before taking his crouched stance in the batters box. Eddie weighed 65 pounds and stood 3 feet 7 inches, making him shortest player in the history of the major leagues. He was walked on four pitches and was replaced by a pinch runner at first base.

Eddie earned $100. As a promotion that day, Cleveland's Falstaff Brewery distributed midget bottles of beer at the stadium. The league came down hard on Veeck, changing rules and fining him.

Veeck was one of the games most colorful and controversial figures. One of his last promotions was Disco Demolition Night in Chicago in 1979, when he owned the White Sox. He encouraged fans to bring their disco records to the game. He held a huge bonfire on the field in which a huge pile of vinyl disco records were set on fire, resulting in a full-scale riot and a forfeit of the game to the visiting Detroit Tigers. ".......Back to you, Jim!!"
Posted by bbogodfrey17@gmail.com at 5:50 PM