63 Years Ago This Month.....Jackie Robinson 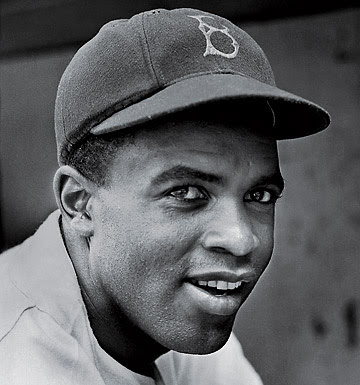 Sixty three years ago this month, Jackie Robinson was called up from AAA baseball and became the first black player in Major League Baseball. He was a member of the great Brooklyn Dodgers and was signed by the courageous Branch Rickey. Few people realize the impact this event had on race relations in America. Historian Doris Kearns Goodwin says, "Robinson's efforts were a monumental step in the civil rights revolution in America".
In recognition of his achievements on and off the field, Jackie has been posthumously awarded the Presidential Medal of Freedom, the Congressional Gold Medal, and in 1999 he was named to the Major League Baseball All-Century team. He was a very accomplished American both on and off the field.
In Jackie's honor, on April 15, all major league uniformed personnel (players, managers, coaches, and umpires) wore #42, Jackie's number. His #42 has been permanently retired by major league baseball......no other player, on any team, will ever regularly wear it again. It is difficult to think of many people who have had more impact on American culture than the great Brooklyn Dodger and great American, #42, Jackie Robinson.
Posted by bbogodfrey17@gmail.com at 8:40 AM