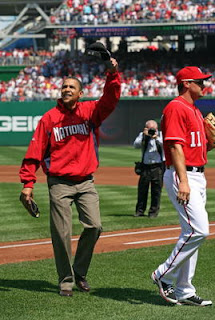 Just too cool. Presidents throwing out the first pitch to open the major league baseball season goes back to William Howard Taft's first pitch in 1910 in old Griffith Stadium in Washington. It is always a joyous occasion for a baseball fan.

100 years later in 2010, Barack Obama continues the great Spring tradition. Hopefully it is a time when all people are able to put politics aside and honor and respect the The President in of his ceremonial role as "Head of State" (as opposed to head of the executive branch of government or head of a political party). What a beautiful Spring day it was, April 5, 2010. Click below for short video of event.