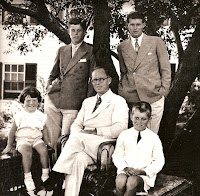 Alot is being said about today's Senate election in Massachusetts. Judy Woodruff of PBS said, "a tragedy of Greek proportions if health care reform goes down by virtue of the Kennedy senate seat turning over." ABC's George Stephanopoulos calls it "the upset of the century, the greatest upset of my lifetime." Many reasons are being given for the outcome, some petty, some worthy rationale. Some blame Coakley's poor candidacy. Others say the American people continue to be anxious about the future.

For me, it's a sad day because I love history. I revere from whence we came......the good, the bad, the in-between. Senate seats are steeped in history. Senate seats hold lineage. There's the Fulbright seat in Arkansas, the Talmadge, the Eastland, the Stennis seats in the deep south, the Helms seat in North Carolina, the Dirkson seat in Illinois. There are other seats of historical note from which the republic has been shaped and impacted.
But there has been no seat like the Kennedy seat in Massachusetts. It was occupied nearly 50 years by Ted Kennedy. When his name arises, Kennedy haters like to focus on Chappaquiddick, but for me, a better America was spun from Ted's tireless efforts in the Senate. Before Ted, the seat was occupied by his brother John, the iconic 20th century figure, who first ousted the legendary Henry Cabot Lodge from the seat in 1952 by 70,000 votes.
Yes, it is a sad day for some of us. I am concerned about the step backwards it represents to me, about the risk at which it puts critical health care reform, about an agenda I believe once again has America moving forward. But that's not why it saddens me. It saddens me because I love history........because an important link in the strand that binds us to our past has been severed.
Posted by bbogodfrey17@gmail.com at 2:21 PM