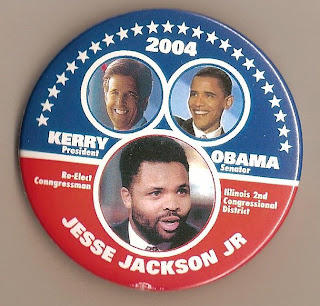 I enjoy collecting political buttons. I have buttons back to the McKinley-Bryan race in 1896.

The button above is one of my favorite newer era buttons. In the hobby, we refer to this type of button as a trigate-coattail button. It is a 3.5 inch Kerry for President, Illinois coattail piece. As you see, it has a young Barack Obama running for US Senate and a younger Jesse Jackson Jr. running for Congress, both riding the coattails of the top of the Democratic ticket.

It is a rare, attractive piece, with three, obviously high profile, Democrats on the button. It is also considered an "early Obama" button, making it a very nice collectible.
Posted by bbogodfrey17@gmail.com at 9:11 AM