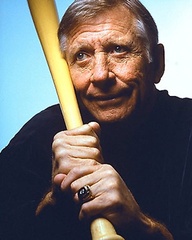 The picture of the day is that of Mickey Charles Mantle, one of the most iconic athletes of the 20th century.  Next to Michael Jordan, no other athlete has continued to resonate with his fan base like The Mick.  His memorabilia and signature continue to increase in value, decades after his death.
Mickey was, of course, the top draw for the New York Yankees dynasty of the 1950's.

Mickey played on 7 World Series Championship teams with the Yankees from 1951 to 1962.  He won 3 MVP awards, a Triple Crown, and he hit 536 home runs in a pre-PED era.  He would probably tell you his only PED was cold Budweiser.   Mickey died at age 63, due to hard living and complications from alcohol abuse.  In eulogizing Mantle, sportscaster Bob Costas described him as "a fragile hero to whom we had an emotional attachment so strong and lasting that it defied logic."

I recommend Jane Leavy's recent Mantle biography, "The Last Boy: Mickey Mantle and The End of America's Childhood."  The theme of the book, a great read (she was given close and personal access to Mickey for many years), is that America began getting more complicated toward the end of Mickey's career, 1968 being his last year, with the likes of Vietnam, civil rights, assassinations, and a general more serious agenda.

Mickey was a flawed and complicated person.  But he was the perfect hero for those of my generation, the first television sports generation.  For those who loved the game of baseball, the preeminent American pastime and dominate sport of the time, Mickey Mantle was a greatest performer of the day and a larger than life American character of the time.
Posted by bbogodfrey17@gmail.com at 5:08 AM