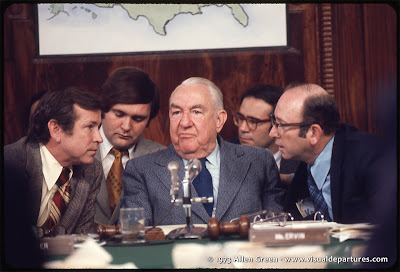 One of the interesting, fascinating contradictions about North Carolina politics revealed in Rob Christensen wonderful book, "The Paradox of North Carolina Politics", is the example of Sam Ervin's life. Born in 1895, Sam was a grand, folksy, charming, intellectual, Harvard educated, constitutional, country lawyer from Morganton, NC.

The following are informative and descriptive quotes which give a flavor and insight into who Sam was and the role he played in North Carolina history and in the history of the United States Senate. I am archiving these quotes, and I hope you find them as intriguing as I do as we attempt to keep this great, legendary, complex, American historical figure's memory alive.

"Ervin's opposition to civil rights protected his political base, enabling him to lead the fight against McCarthyism, to become the Senate's leading civil libertarian, and to investigate the abuses of Watergate. It enabled him to play a significant role in bringing down two major 20th century abusers of political power, Joe McCarthy and Richard Nixon." ~Rob Christensen

"If Senator McCarthy did not believe those things when he said them about the Senate Committee, then there is pretty solid ground to say that he ought to be expelled from the Senate for mental incapacity. On the contrary, if he put those things in there honestly believing them to be true, then he evidently suffered gigantic mental delusions, and it may be argued with much force that he should be expelled from the Senate due to mental difficulty." ~Sam J. Ervin, on 'Meet The Press', going after McCarthy for trying to intimidate the Senate committee investigating him.

"Sam is the only man we could have picked on either side of the aisle who would have the respect of the Senate as a whole." ~Senate Majority Leader Mike Mansfield, on Sam's appointment as Chairman of Senate Watergate Committee.

"In pursuing its task, it is clear that the committee will be dealing with the workings of a Democratic process under which we operate in a nation that still is the last, best hope of mankind in his eternal struggle to govern himself decently and effectively." ~Sam J. Ervin, speaking of the task of the Watergate Committee.

"He brought the stern values of another age into the latter half of the twentieth century at a time when unprincipled men had been permitted to flourish by chicanery and the arrogant abuse of power. He found that those older values were more valued than ever during the Watergate era and that people like himself, who were schooled in them, were in great demand. Many in the nation reached out for his guidance and in doing so reached out for the guidance of the Founding Fathers." ~Paul R. Clancy, Sam's biographer.

"The evidence thus far introduced before this committee tends to show that men upon whom fortune had smiled benevolently and who possessed great financial power, and great governmental power; undertook to nullify the laws of man and the laws of God for the purpose of gaining what history will call a very temporary political advantage." ~Sam J. Ervin, referring to Watergate.

(Pictured above is an image from the "Watergate Hearings". North Carolina's Rufus Edminston is in back left, Sen. Howard Barker is front left, and Committee Counsel Sam Dash is on the right).