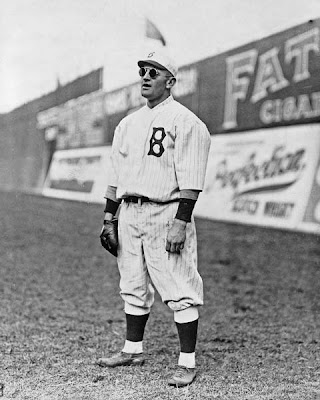 Very cool 1915 photograph of none other than Casey Stengel, patrolling the outfield for the Brooklyn Dodgers (wearing new fangled sunglasses no less!). Charles Dillon Stengel's nickname, by the way, came from the initials of his hometown, Kansas City, and has nothing to do with the poem, "Casey At The Bat."

Casey went on, of course, to manage the great New York Yankees during the Golden Era of baseball and became known as "the old professor." He guided the Yankees to 7 World Series Championships, including 4 in a row from 1950 through 1953.