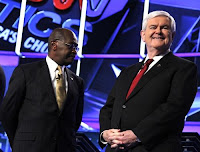 I am concerned about the low quality of candidates which have emerged as standard bearers for the Grand Old Party. For the most part, they seem to have neither the intellectual capacity, judgement, values, nor experience we would hope for in candidates for President of the United States and leaders of the free world.

My theory as to why this is relates to the general very low regard that Republicans have for the concept government. This attitude began, in the modern era, as Ronald Reagan was advised by conservative "think tanks", to espouse "government is the problem, not the solution." As a result of this low regard for the public sector, the best and brightest of those with ideological views consistent with this attitude, modern day Republicans, want nothing to do with government. They do not believe in the power of government to help make people's lives better. They see government as an impediment. They generally do not believe in the concept of "community." Therefore, they remain out of government and in the private sector.

They generally believe that if Jim Bob, who has a machine shop around the corner, is just left alone by government, that the world will be just fine, regardless of who is occupying seats of power in Washington. They believe that the marketplace left alone, and a people free from the constraints of government (except for those programs dear to THEM), is all that matters.

Well, that is very far from reality. The next President of the United States, as with past Presidents, will determine the direction in which the world proceeds for years into the future. He will determine matters related to war and peace, to the position of America related to new, emerging economic powers, and he will represent America and her values on the world stage. He will set a vision and strategy regarding domestic issues such as health care reform, abortion, immigration policy, taxation, climate change, job creation, and more.

Republicans need to awaken to the fact the we live in an interdependent nation and world. They need to awaken to the fact that those who lead, who have vision and develop strategy, are very critical to our future and to our direction. They need to get serious about leadership. They need to develop a respect and a regard for the organizational structure of America, called government, which our founding father's established and which has resulted in the wealthiest nation, the most compassionate nation, and a nation with the highest standard of living, for the most people, in the history of the world.
Posted by bbogodfrey17@gmail.com at 7:54 AM