The Appointment of Rep. Tim Scott to the U. S. Senate 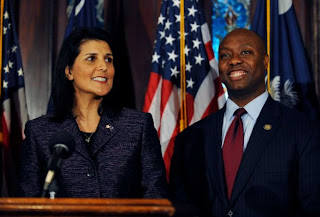 The symbolism should not be lost on a Rep. Tim Scott, an African American from Charleston SC, being appointed today to the US Senate from South Carolina, the first black member of the Senate from the South since reconstruction, by an American Indian female South Carolina Governor, at a South Carolina State House where numerous Union cannon balls landed in 1865, on the grounds on which stand a confederate flag and statues of  "Pitchfork" Ben Tillman and Strom Thurmond.

My hope would be that Rep. Scott may change ideologically over time, and that he might bring along the less educated, rural, deep south citizenry with him, including their views and attitudes towards economic justice, health care, gay rights, gun control, immigration reform, strict separation of church and state, and climate change recognition.  What a profound way this would be for Rep. Scott to live out and honor the dream of previous African American leaders who paved the way for his opportunity.  Who knows?  Such moves toward moderation and progress, such transformation, has certainly taken place in the political arena in the past.

In any event, as a native southerner, sensitive to our history, I feel a sense of pride in his appointment.  My son Rob, a top aide to Governor Haley, is a close personal friend of Rep. Scott.  Rob was standing only feet away as the very historic appointment was announced by the governor in Columbia.

Carl Cannon points out in an excellent piece that, "it was neither an accident nor happenstance that the Civil War broke out in South Carolina, the first state to secede from the Union. Among the political class, including its congressional delegation, South Carolina was where racism burned brightest, where the skeletons of Jim Crow were buried the deepest, and where the ghosts of slavery have taken the longest to exorcise."

Believe it or not, Cannon further points out, "Tim Scott defeated Strom Thurmond’s son in a 2010 Republican congressional primary. It was a nice historical footnote, but its true significance may have been that Scott’s election wasn’t about race, but about fiscal probity within the GOP. This is a reminder that history doesn’t move in a straight line, but rather takes an uneven course. Sometimes it follows a bending arc, a rainbow that exists in many hues and which ultimately returns to earth."

It is my guess Rep. Scott will be a very long-term serving U. S. Senator from South Carolina.  May God be with him.  I will be watching attentively for signs of the future Senator Scott bending that moral arc of the universe, to which Dr. King often referred, towards justice and fairness, and to him bringing much of his southern citizenry with him.