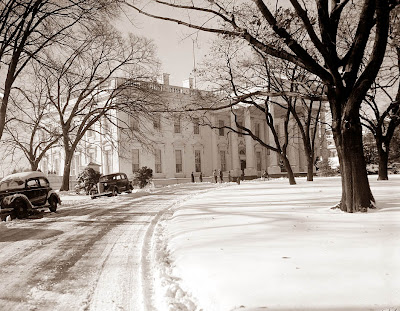 A beautiful, snowy day outside of the White House in 1938. President Roosevelt, in not the best of health, legs confined by braces, was likely inside contemplating the growing war in Europe.


Just ahead was a year to be filled with significant events such as the growing menace of Adolph Hitler in Europe, and on the home front the opening of the 1939 New York World's Fair, the premiers of both "Gone With The Wind" and "The Wizard of Oz", Al Capone's release from Alcatraz, Lou Gehrig's retirement from baseball due to his ALS, and the great thoroughbred racehorse Seabiscuit making the front page, above the fold, almost weekly.

As America continued to struggle through the Great Depression and confront major events, big change was around the corner for both the President and for all Americans.
Posted by bbogodfrey17@gmail.com at 11:39 AM