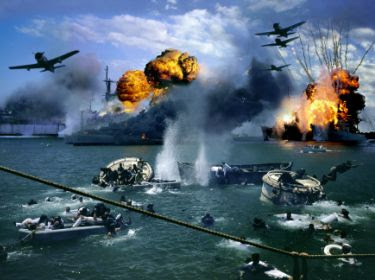 It is a rainy December 7, 2011, a good day to reflect. 70 years ago today, World War II began for America, "a date which will live in infamy", said President Roosevelt. It was ironically this event that necessitated America finally getting involved in the war, precepitating the alliance between Churchill and Roosevelt, an alliance and relationship which likely saved Western Civilization.

Today is my in-law's 66th wedding anniversary. Andy returned from the South Pacific at the end of the war in 1945 and married Jean a couple of months later. They are 'hanging in there', still in their home of nearly 50 years. Bunny delivered breakfast to them this morning.

I reflect on, and pray hard for, my dear daughter Elizabeth, who is now pregnant with her first child, after a beautiful 2011 wedding to Brandon. I reflect on my man Rob, as he helps Nikki run the great state of South Carolina. I have so much to be grateful for and much to be concerned with..........as it should be.

I continue to reflect on my semester long series of classes at Elon this fall..........so much wisdom imparted. I especially recall, and like, the following two quotes shared by Dr. John Sullivan, Retired Professor of Philosophy, who coordinated the semester. The first one helped open the semester, the second one helped close the semester.

Peace and Blessings of the Season
Posted by bbogodfrey17@gmail.com at 6:23 AM