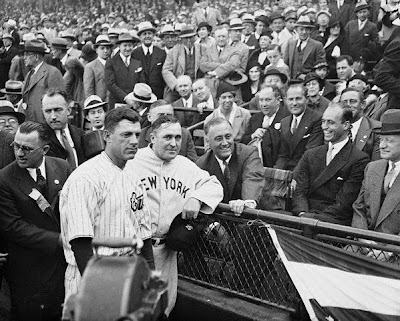 Governor Franklin D. Roosevelt attends game three of the World Series at Wrigley field , October 1, 1932, while campaigning for President in the Windy City. Cubs Manager Charlie Grimms and Yankee Manager Joe McCarthy pose with the Governor (wife Eleanor behind him) prior to the game. It was this game, won by the Yanks 7-5, that Babe Ruth was said to have "called his shot" before hitting at home run over the center field fence at Wrigley.